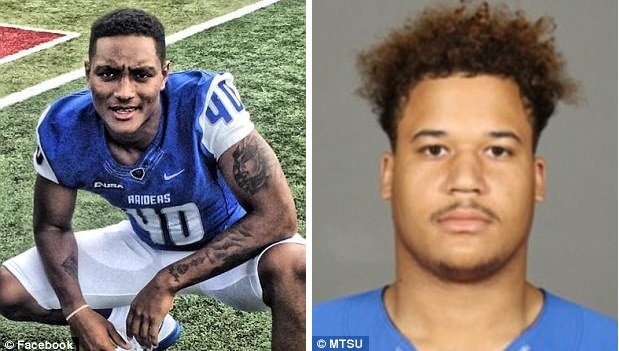 Middle Tennessee head football coach Rick Stockstill has dismissed two players from the program. As WGNS reported earlier, Justin Akins and Shalom Alvarez are at the center of an investigation for animal cruelty.

On Monday (4/17/17) night, Murfreesboro Police Sgt. Kyle Evans told WGNS, "MPD Detective Kristy Inglish obtained a warrant for Cruelty to Animals against Shalom A. Alvarez, age 21." At this point, Akins has not been charged. The video appeared on his account, but reports suggest he was not the one allegedly abusing the animal.

Alvarez can be seen in a SnapChat video on Akins' account allegedly yelling at a puppy, which he pulled from under a bed and was seen "violently" striking it several times. The video was sent to the Rutherford County director of PAWS (Pet Adoption and Welfare Services) after the incident occurred.

"When confronted with situations of inappropriate conduct, it is easy for a coach to simply dismiss players in trouble without taking time to study the situation. I feel it is important to consider the facts carefully, and seek input from others with information and expertise, before reaching a decision.

"After reviewing the matter further, and speaking with authorities with the appropriate expertise, I have decided to dismiss Justin Akins and Shalom Alvarez from our football team. Their actions were in violation of the values and standards of our program.

"I appreciate the work by the Rutherford County Pet Adoption and Welfare Services and Murfreesboro Police Department. Their expertise was invaluable in this process and will help educate our players."

Two MTSU football players are at the center of an investigation for animal cruelty, according to Murfreesboro Police records.

MTSU Athletic Director Chris Massaro says the actions captured on video are obviously disturbing and they welcome the inquiry by the Rutherford County Pet Adoption and Welfare Services.

Akins and Alvarez have been suspended pending the P.A.W.S. investigation and must perform community service to benefit local animal welfare efforts.

As we reported earlier, Alvarez can be seen in a SnapChat video on Akins' account yelling the dog doesn't pay rent. This as he allegedly pulled the puppy out from under a bed while "violently" striking it several times. Each strike the puppy yelped, according to a police report.

An animal cruelty case is under investigation in Murfreesboro after someone sent the animal control director a SnapChat video of a puppy being abused.

The subject seen in the video abusing the puppy has been identified with the help of MTSU Police working with Murfreesboro Police and the Pet Adoption and Welfare Services office (P.A.W.S.). Information revealed in the police report shows that the suspect may actually be an MTSU football player who stands over 6 feet tall weighing in at about 220 pounds.

In the video, the suspect can be seen yelling that the dog doesn't pay rent as he pulled the puppy out from under a bed while "Violently" striking it at least five times. Each strike the puppy yelped, according to a police report.

The case could go to the May Grand Jury.