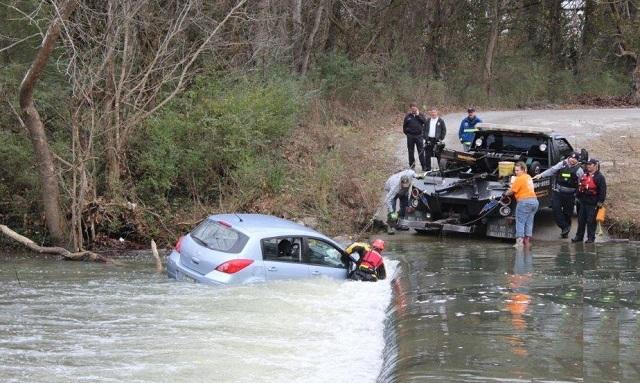 A paramedic with the Rutherford County Special Operations Response Team helps guide a partially submerged car out of the Stones River to wrecker operator Scott Pack of Pack's Towing. Deputies and firefighters rescued four people from the car Saturday at slab where Elam Mill Road crosses the river. The car was pulled from the high waters shortly after 9:00 o'clock Monday morning (12/8/2014).

Rutherford County Sheriff's deputies and Rutherford Fire and Rescue firefighters rushed into frigid, raging water to save the lives of a mother and three daughters when their car started submerging into Stones River Saturday night.

Mother Jodie Cowan and her daughters, Ashley Wells, 19, Tiffany, 13, and Tomi Jo, 7, were rescued and treated at St. Thomas Rutherford Hospital after the ordeal about 9:35 p.m. Saturday night at Elam Mill Road, said Deputy Moses Mosby, who was one of the deputies who responded.

When Deputy Mike Farmer arrived, he found the car partially submerged with water rushing into the car. One of the girls almost fell out of the car. Deputy Mosby grabbed a rope and the deputies and firefighters entered the water.

"We were standing on the slab fighting against the current," Deputy Farmer said. "They (the family) were being sucked out of the car. I believe if we hadn't responded, I believe all four would have perished."

"She crawled up my neck and held onto my head," Lt. Haynes said. "The little girl was just crying. I kept telling her to hold on. I was just praying, just praying."

"It was like my body had completely shut down," Lt. Haynes said.

Deputy Farmer, who is a retired U.S. Army Ranger and has previous experience in swift water rescue, tied ropes for firefighters Ryan Connelly and Daniel Alexander who plunged into the frigid current and rescued Wells and Tiffany.

Both Lt. Haynes and Deputy Farmer said all the rescuers were doing their job.

"By the grace of God, it worked out," Lt. Haynes said.

"They did just like the deputies," Chief Farley said. "They went into the water and pulled victims from that car and kept people from dying. We're proud they actually saved lives. That's what we're here for."

Sheriff Robert Arnold said the deputies were in a dangerous situation.

"This incident also goes to show the commitment our deputies have in saving the lives of people in Rutherford County," Sheriff Arnold said. "I'm very proud of each and every one for risking their own lives for saving the lives of these young children and two adults."

"Your life is not worth that chance," Lt. Haynes said.

Rescue teams returned to the Elam Road slab that crosses the Stones River shortly after 9:00 o'clock Monday morning (12/8/2014) to pull the car out of the high water. (see photo above)