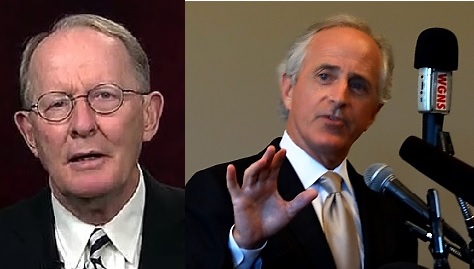 Alexander is chairman of the Committee on Health, Education, Labor, and Pensions

Senator Alexander said, "Once again our military has demonstrated its superior training and skill. The United States should have and did demonstrate our disgust with the Syrian government's apparent use of chemical weapons against its own people. There are a variety of ways to do that, some military and some not. If the President intends for there to be a sustained U.S. military response in Syria, that requires the approval of Congress, according to our Constitution. During the congressional debate, I will assess whether additional military action would do more harm than good by setting off a chain of consequences that could involve American fighting men and women in another long-term Middle Eastern conflict."

Corker is chairman of the Senate Foreign Relations Committee

Senator Corker said, "The regrettable failure to hit back in 2013 in response to Syrian dictator Bashar al-Assad's use of chemical weapons remains a failure of the Western world. As a result, more than 500,000 people are dead in one of the worst humanitarian disasters in modern times," said Corker. "The precision strikes Friday night (4/13/2018) send a clear signal to the Syrian regime, and I applaud the president for following his words with action and taking an important step in coordination with our allies to hold Assad accountable. Going forward, it is imperative that the administration engage directly with Congress and clearly communicate its plan to the American people."