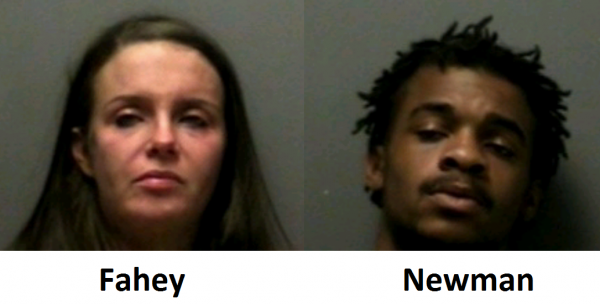 A Murfreesboro woman was charged with her 4th DUI and her 3rd Driving on a Revoked License Charge. 26-Year old Amber Fahey was pulled over on Mercury Boulevard this past Friday afternoon around 3 by Officer Troutman and Detective Knox. Fahey was unable to maintain her lane of travel, according to authorities.

The female was asked to perform a field sobriety test, which she failed. Two children were in the car with Fahey when she was pulled over, therefore she was charged with “Felony Reckless Endangerment X2.” The children were released to a family member.

Passenger Khalil L. Newman was arrested with Fahey. The 22-year old had a warrant for his arrest charging him with DUI. He was also charged with “Felony Reckless Endangerment,” because of a previously filed warrant. His court date has yet to be scheduled. He too remains behind bars, as of Monday.