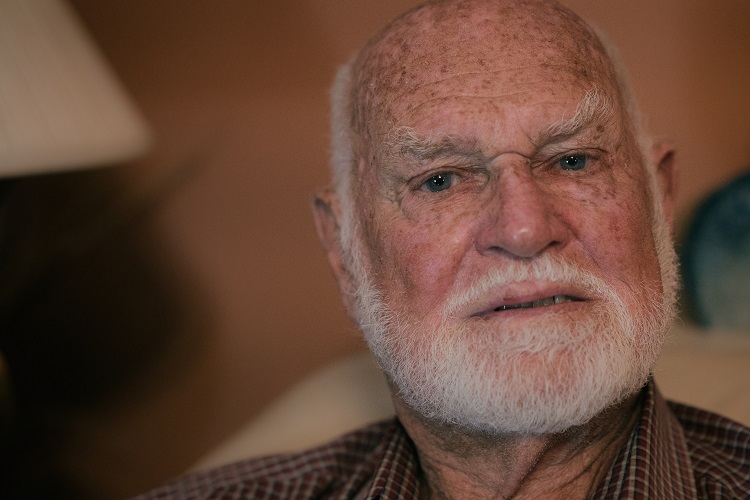 This WWII Veteran has a rugged exterior standing about 6 feet tall with grit in his face that says tread lightly. The 89 year old U.S. Marine who now calls Murfreesboro, TN home has worked at the top secret Area 51 base, controlled and built heat seeking missiles and even ate dinner with President Truman.

But, he also has a heart that you may not see upon a simple glimpse. He has handed out 3,800 stuffed animals to children, Alzheimer's patients, and even kids who were involved in car accidents or house fires.

World War II Marine Glenn H King is not your average 89 year old. He has seen and been involved in the history of America. He has also been a part of our nations military defense system.

These are a few conversations that Scott Walker had with Mr. King at his Murfreesboro, TN home...

In the second half of the interview, King dives deeper into his highly secretive job with the federal government after he gets out of the military.

In the third and final portion of our interview, King's friend Jeffrey Erchul talks about the smiles that King brings to so many. 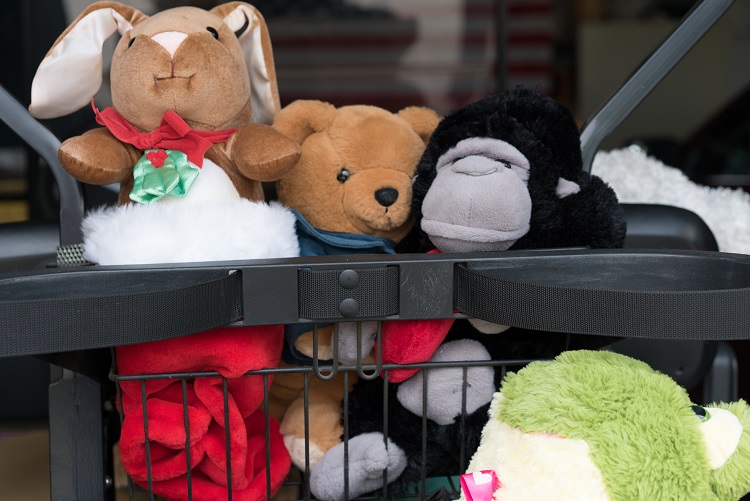 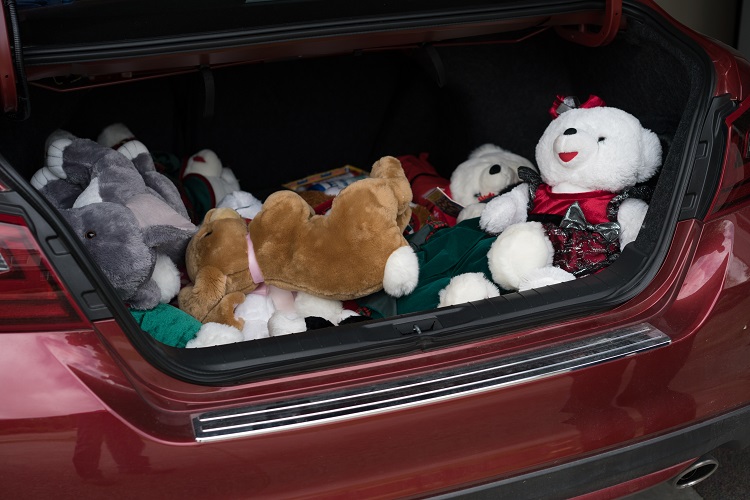 The back of Glenn's wife's car 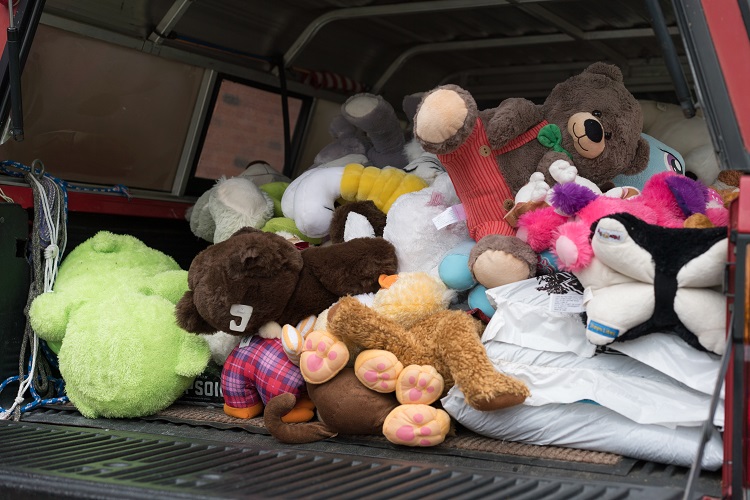 In the bed of Glenn's truck

Glenn King wrote about his mission of Teddy Bears below:

On January 1st 2016, New Years Day, my wife asked me to make a New Year's resolution that would occupy a portion of my leisure time. Since I recently discovered a source of reasonably priced "Teddy Bears" (stuffed animals) I began the hobby of collecting and distributing the animals to children and adults and also patients in the hospitals. To-date I have given out about 3,800 Teddy Bears and Stuffed Animals.

This new hobby was an offshoot of an activity that I have been doing for several years. Living in a subdivision with about 400 homes I noted that many of the home owners were young couples with children. They would take their children on a stroll or a walk on the flat roads of the subdivision. Since I amused myself by cruising the neighborhood in my golf cart, I would stop the cart and talk to the parents and ask if it were all right to give the child a small lollipop. I would present a basket full of lollipops and watch the children try to decide which one to choose. What the children didn't know was that beneath the wrapper, they were all the same. I adopted the policy of never approaching a child without the parent's permission.

In some cases the parents had a small dog on a leash. I would ask if it was OK to give the dog a treat. This always made the dog happy. Sometimes on a later day when the dogs would see me in the golf cart they would jump in the cart and sometimes into my lap for a treat.

I enlarged my new hobby to include selected adults.

My hobby started off very smoothly since I purchased about 100 Stuffed Animals to give to the children. I packed them into a large black garbage bag and mounted them in the back of my golf cart reserved for golf clubs. The extra Teddy Bears sat next to me on the golf cart seat. Needless to say the children were always happy to see me with the new childhood gifts. The parents were also very pleased. Most children said "Thanks". In some cases where there were several children I would dump the bag full of animals on the ground for them to choose from. This was often a great site to see. Often there were so many animals that they didn't know which to choose.

It didn't take long in the good weather months to saturate the neighborhood children with stuffed animals. One time I pulled my golf cart in front of a neighbor's house with four children playing in the yard when I heard a loud voice coming from the second story window yelling "No More Bears". I got the message and drove on. Having saturated the neighborhood with stuffed animals I had to move on to other worthy endeavors. I took inventory of my vast collection of animals to find that I had over 100 very small ones. I selected 80 of the best ones and divided them into two bags of 40. I gave the first bag to a neighbor who ran the pre-school nursery at Saint Paul's Episcopal Church. The second bag of 40 animals was given to a Catholic Priest that was about to make a missionary trip to India. He said that he plans to give the animals to the poor children on his visit.

I was also informed of an organization that serviced single mothers and their children. I have delivered several bags filled with animals on several occasions.

Often seeing on TV, a Policeman giving a child a Teddy Bear after a car accident, I thought that the local Police Department could put to use some of my animals. I loaded the bed of my pickup truck with five full bags of animals for a total of about 150. When I got to the Police Department I went to the receptionist desk and asked if the police still carried stuffed animals in the trunk of their cruisers to give to children in distress? She gave me a blank look and said she didn't know of the practice. She asked a female officer that entered the office. She replied that it was still the practice. She offered to help me bring in the bags of animals from the truck. I didn't mind that they didn't ask me who I was but I did mind that they didn't thank me. A short time later I went to the Sheriff's Office to see if they would like to have some stuffed animals. The receptionist on the desk informed me that they only accepted brand new ones. No animals were delivered to the Sheriff Office.

I tried the Fire Department. They said they would take as many as I can deliver. I really loaded the truck and gave them 500+ animals. Wow, were they appreciative. They made my day.

Not far from my home, I found three Pre School Child Care Centers. I went to each and spoke to the owner about giving the school some stuffed animals for the children.

Permission was granted and about 100 animals were given to the excited children. Stores, restaurants, parking lots and play grounds were also good areas to meet parents and children.

The most rewarding of all my Teddy Bear activities was going to three local hospitals to give Teddy Bears to Alzheimer patients. At each hospital, I was assigned an escort nurse to take me to the patient's room. Most of the patients were female. When the nurse and I would enter the room most patients were sitting in a chair staring down at the floor. Their face showed no emotion until they heard us enter the room. When they looked up and saw that I was holding a large Teddy Bear the expression on their face turned to a look of joy. They would extend their arms to accept the Teddy Bear. They would hug, squeeze, caress and kiss the Teddy Bear. When I was about to leave they would extend their hand to thank me. Often they didn't want to release my hand from theirs. Feedback from the nurses is the patients don't go anywhere without their Teddy Bear. This part of my Teddy Bear hobby has been the most rewarding.

When delivering my Teddy Bears to a 'Toys for Tots' location, I was approached by a lady that said she was a member of an organization that cared for families in need. She asked if I could furnish her organization with some Teddy Bears for the children. I said I would be pleased to help. I got her delivery address and said I would deliver the animals the next day. When I delivered the animals to the place of her employment, she wasn't there. I'm sure she was very surprised when she returned to find well over 100 animals displayed in a neat pile.

Some of my friends like to get very small stuffed animals for their dog to play with.

On several occasions, I have obtained life size animals such as a real looking lion and pony. The man that I gave the lion to for his grandchild has placed the lion in a sitting position on the passenger's side of his automobile. He says that he gets some very strange looks from passing traffic. A friend, that I gave an almost life size pony to, planned to send it out of state, to his granddaughter. He didn't get to send it when he found out it would cost over $100.00 to ship it. He later gave it to a child that loved horses.

One of the most enjoyable groups of people to give animals to is grandparents. If they have grandchildren that live close by, they will take an arm full of animals. They are a joy to work with.

Often I am asked where I get the collection of Animals. I reply that I get them from the "Teddy Bear Orphanage". I often get a strange look before they walk away.

Tuesday night is my favorite of the week. I am on a Trivia team at a local restaurant. Besides being on a good team, I have my truck packed with the animals. The customers and waitresses have happy lights in their eyes. Many customers come in with their children and grandchildren. Last week, I passed out 22 animals and brought serious delight to the children and customers.