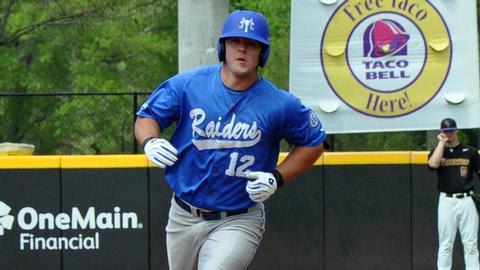 There will be 18 Middle Tennessee baseball student-athletes participating in a dozen different collegiate summer leagues in 2014. A few of the Blue Raiders have already begun, while others start within the next two weeks.

Four Raiders will participate in the Prospect League. Starters Austin Bryant and Jake Ingold are playing for the Danville Dans and the Sprinfield Sliders, respectively. Meanwhile, junior college newcomers Ronnie Jebavy (Danville Dans) and Tyler Troutt (Quincy Gems) will get in some summer work before stepping onto campus in the fall. Troutt gave up just three hits and an unearned run in his first effort against Danville on June 1.

Jared Allen returned to the High Point -Thomasville Hi-Toms of the Coastal Plain League, where he is hitting .455 with two doubles and a pair of RBI in his first three games. Matt Blackham continued his impressive year with the defending Texas Collegiate League champion Brazos Valley Bombers. The lefty fanned seven of nine batters faced in a three-inning hitless affair against Acadiana on May 29.

Relief Pitcher Garrett Ring threw a solid 2.1 innings in his first outing for the Mankato Moondogs against Kenosha in the Northwoods league, allowing just two unearned runs. Madison College transfer Nate Hoffman gave up an earned run in two innings of relief against Kenosha on June 2.
Reid Clements and Kaleb King are spending their time in the Ohio Valley League. Clements has started in one game for the Madisonville Miners, while King has played in one game for the Dubois County Bombers.

Blue Raider veteran hurlers Kooper Kessler and Heath Slatton are spending their summer with the Staunton Braves in the Valley League. Slatton fanned all three batters faced in a 6-5 win over the Harrisonburg Turks on June 1.

Sophomores Will Small and Caleb Smith are staying closer to home. Small is spending his summer with the Murrells Inlet Longboards of the Beach Collegiate League, while Smith is playing this year with the Southern Collegiate League's Pineville Pioneers.

For complete weekly updates on the Blue Raiders and their summer league progress, visit GoBlueRaiders.com.