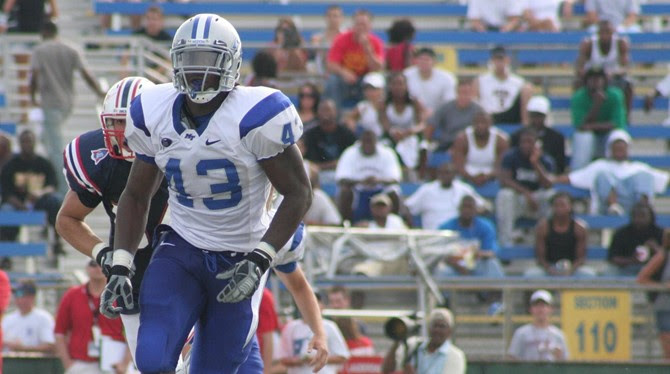 MURFREESBORO, Tenn. - In 2006, Middle Tennessee played in its first bowl game since moving to Division I-A in 2000.

The Blue Raiders traveled to Detroit, Michigan to take on Central Michigan in the Motor City Bowl after a season where they went 7-5 and 6-1 in the Sun Belt Conference, giving them a share of the league title for the first time since 2001.

While the bowl game didn't go the way the blue and white wanted, falling to the Chippewas 31-14, there was one player who stood out on the defensive side of the ball with six tackles and two sacks.

That player, Erik Walden, will be inducted this year into the Blue Raiders Sports Hall of Fame.

"To be able to be mentioned with the people who are already there, it's a blessing," Walden said. "It's a compliment to hard work, and you have to stay true to who you are. That's what really matters."

As college football has gradually switched to more of an up-paced passing league, having defensive players who can get to the quarterback has become more and more essential.

Walden was that guy for Middle Tennessee from 2004-07, along with being an academic success story.

The defensive end from Dublin, Georgia couldn't play in his first year at MT because of NCAA academic guidelines, but came out as a freshman in 2004 looking to make up for it.

He led the team in sacks (six) and tied the team lead in tackles for loss (8.5), and at the same time, Walden started to really get himself together in the classroom as a physical education major.

After splitting time between linebacker and defensive end as a sophomore, Walden became an all-time Blue Raider great while leading the team to the bowl game as a junior.

During spring drills before the season, he was given the Dr. James E. Walker Junior Academic award and a solidified starting spot at left end. He used both as fuel and went on to set a school record with 11.5 sacks (ranked 10th nationally) and tally a career-best 48 tackles, 14.5 going for a loss.

"Once I saw that opportunity, I felt like I needed to take advantage of it," Walden said. "Everything that year, from the championship to going to the bowl game and the academic award, it was all a blessing. That experience to be the first team to go to a bowl game is something I'll cherish for the rest of my life.

"It really molded me for the NFL. All of the things that are important in the NFL, as far as getting your mind, body and spirit right, came from MTSU."

Walden missed two games as a senior and finished with two sacks and 46 tackles. He remains the program's all-time leading sacker with 22.5 in his career for 136 yards, and he's also still second all-time with 40 career tackles for loss for 177 yards.

He was the first Middle Tennessee defensive end ever drafted when he went in the sixth round of the 2008 NFL Draft to the Dallas Cowboys, and since has experienced a high amount of success as a pro.

In a career spanning 11 seasons, Walden has played for seven teams, including the Tennessee Titans in 2017, and racked up 356 tackles and 36 sacks, including a career-high 11 for the Indianapolis Colts in 2016.

"It's been a roller coaster, but it's been a blessing," Walden said. "It's easy when it's all smooth, but when you have to go through some adversity and have to bounce back, you really learn who you are."

Walden was signed by the Seattle Seahawks in 2018 but didn't play in a game after being placed on injured reserve in September.

He's now enjoying his time as a free agent. The father of two is still working out, but for now, being a dad is the perfect job.

"I'm doing the daddy daycare thing and working out," Walden said. "I'm just enjoying this valuable time with my kids. Every moment is a blessing."

Admittedly, Walden hasn't been to a Middle Tennessee football game in some time, but the next one he goes to, he'll get to do so as a Blue Raiders Sports Hall of Fame member.

He can't wait to be at Floyd Stadium again.

"I haven't been to a game in a while. I'm looking forward to seeing those boys work," he said.