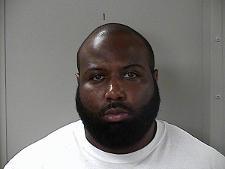 A Murfreesboro Police Gang Detective was notified after one pound of marijuana was found inside the apartment of a man on the New Salem Highway.

Police responded to the apartment of 30-year-old Douglas Shaw in reference to a drug complaint. When police arrived, they could smell marijuana in the air which was said to be emitting from Shaw's apartment.

Inside, officers located one pound of weed on the kitchen floor along with three scales and marijuana that was individually packaged. Upon further searching the apartment unit, more marijuana was located.

In all, just under 5 pounds of marijuana was recovered from the apartment. Two guns were also confiscated by police along with cash and drug paraphernalia. Detectives also seized a Dodge Challenger with Mississippi tags on the back that also belonged to Shaw.

Shaw was booked under a $16,500 bond. He is currently free on bond and awaiting his first court date scheduled for August.