MTSU students 'take the pledge' to stop sexual assault, saying 'It's On Us' 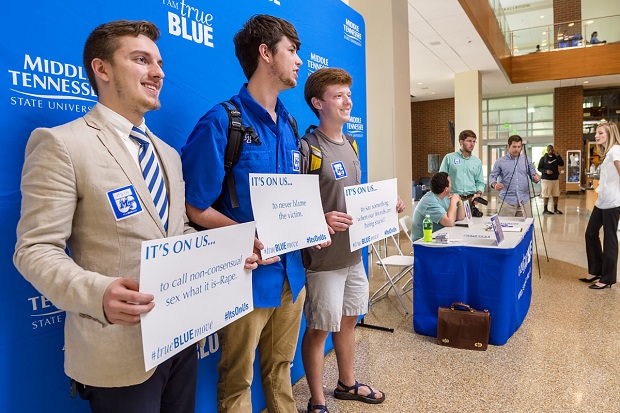 Members of the MTSU campus community are putting their signatures where their sensibilities lie in saying "no" to sexual assault.

At an Oct. 28 pledge drive at the Student Union, the Interfraternity Council collected promises from 136 people to get off the sidelines and get involved when they see sexual assault happening or about to happen.

MTSU's involvement in the "It's On Us" campaign is part of a national initiative launched in September by President Barack Obama and Vice President Joe Biden.

"Its primary purpose is to address sexual assault issues on college campuses and across the nation in general," said Donald Abels, coordinator of Fraternity and Sorority Life.

Students had their photos taken holding signs that read "It's on us to look out for someone who has had too much to drink," "It's on us to never blame the victim," and other similar statements.

"It's time for us as men to actually take a stand, to try and show that we're more than just saying, 'Hey, I'm True Blue,'" said Josh Hollingsworth, vice president for philanthropy and community service for the Interfraternity Council. "We believe in the words that we speak every day as fraternity men."