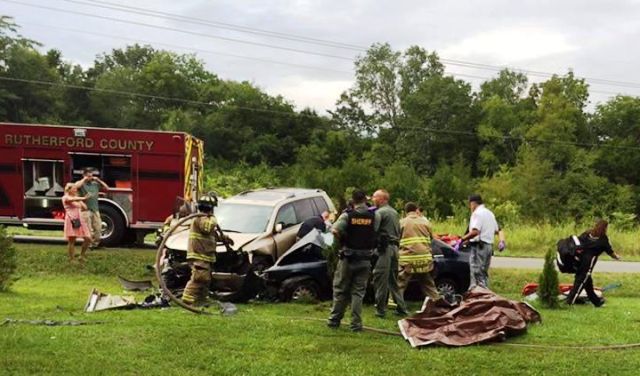 There was a two-car head on collision at 6177 Midland Road at 4:42 Sunday afternoon in the Christiana community. Four persons were taken by LifeFlight helicopter to the Vanderbilt Trauma Center in Nashville. Two were rushed by Rutherford County Emergency Medical Services via ambulance to the ER at St. Thomas Rutherford Hospital.

Tennessee Highway Patrol Lieutenant Bill Miller told NewsRadio WGNS that a 1996 Honda Civic was maneuvering a curve, when the driver lost control, crossed the center line of Midland Road, and crashed head-on into into a 2011 Toyota Highlander.

Chief Larry Farley said, "Rutherford County Fire Rescue extricated four patients from the Honda Civic involved in the head-on collision on Midland Road Sunday afternoon. Fire and EMS personnel along with Sheriffs Deputies worked as a team to remove patients from the vehicles. Four life flight helicopters landed at the scene to transport the patients to Vanderbilt Hospital. I am very pleased with the way all responders work in unison to provide the best care possible for all involved in the accident."

The driver of the Honda Civic was 18-year old Alejandro Arroya of Shelbyville. He and the three other young male passengers in the compact car were taken by LifeFlight helicopter to Vanderbilt. They were ages 12, 9 and 6.

The full-sized Toyota SUV was driven by 65-year old Alvin Rigsby of Murfreesboro. Cynthia Rigsby, his 53-year old wife, was a passenger in the Highlander. They were taken by ambulance to the ER at St. Thomas Rutherford Hospital here in Murfreesboro.

There was an 8-year old child riding with the Rigsby family, but her parents picked the uninjured girl up before the trooper arrived on-the-scene.

Rutherford County Fire Rescue firefighters extricated four patients from one vehicle involved in the collision. Fire and EMS personnel along with Sheriffs Deputies worked as team to remove patients from the vehicles. Rutherford County Fire Chief Larry Farley says he's pleased with the way all responders work in unison to provide the best care possible for all involved in the accident.

Lieutenant Miller reports that all of those involved were wearing seatbelts. An investigation is underway, and charges are pending against the Honda's driver. NewsRadio WGNS will keep you informed.