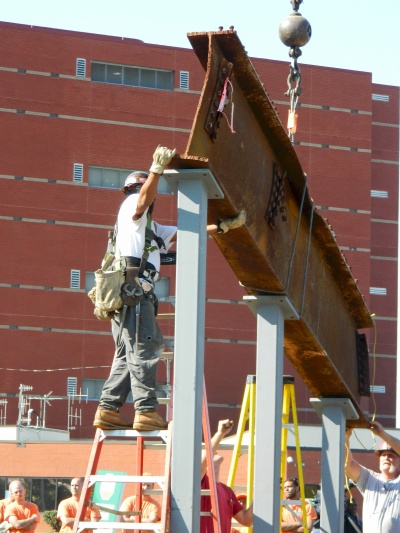 Victims of the 9-11 terrorists’ attacks and the military officers who sacrificed their lives will be remembered from 1 p.m. to 5 p.m. Sunday during the annual 9-11 ceremony at the Rutherford County Sheriff’s Office.

The victims and military will be forever remembered in the 9-11 Memorial being constructed at the sheriff’s office at 940 New Salem Highway. The initial stages of the memorial will be unveiled during the 2 p.m. ceremony. The centerpiece of the memorial will be a 3,000-pound steel I-beam from the World Trade Center I. Deputy Greg Dotson is coordinating the drive to erect the memorial.

ADVERTISEMENT
“I hope everyone will come out Sunday and see the unveiling of the monument so many have given their lives for - those who perished on 9-11, the military who lost their lives defending freedom, families who lost loved ones and those locally who have given time to bring something special to the community,” Dotson said. “The memorial will always be a place for those who served, those who are going to serve and those who have lost someone who has served to remember. The monument will stand forever to symbolize freedom, unity and patriotism.”

During the ceremony, Murfreesboro Fire Department firefighters will ring a bell in memory of the 9-11 victims and law enforcement officers from the sheriff’s office, Murfreesboro, Smyrna and La Vergne Police departments and a trooper from the Tennessee Highway Patrol will fire a 21-gun salute. Rolling Thunder will post the Prisoners of War flag. Country music recording artist Richie McDonald, former lead singer of Lonestar, country music artists The Roys and Zone Status will perform.

Deputy Mary Thompson will sell tickets for chance to win an afghan. All proceeds will help defray costs for Deputy Jennifer Bogle, whose son suffered critical injuries in a motorcycle crash.