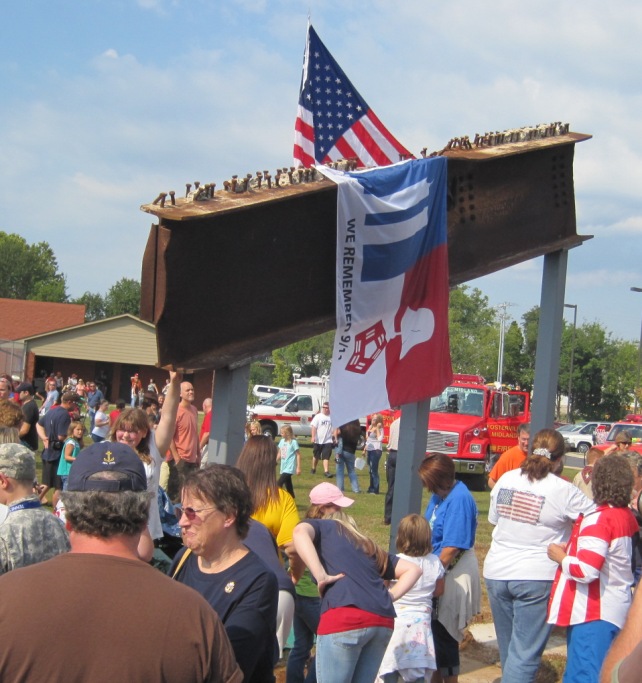 The 9/11 Memorial was dedicated Sunday afternoon (9/11/2011) at the Rutherford County Sheriffs Office. Murfreesboro Firefighter Bill Durkin, who is a New York native, shared his feelings . . .

Dirkin, who is also president of the Murfreesboro Firefighters Association, indicated that the investment of placing the monument is being totally underwritten by individual citizens, area businesses and other groups.

(above photo) WGNS' Bart Walker served as the emcee, and he took this photo of the sea of people who suddenly appeared from under tents, overhangs and umbrellas when the rain stopped. The event was delayed about a 45-minutes as showers crossed the area. The storms stayed away long enough for an afternoon of flag waving.

The monument consists of a 3,000-pound I-beam from Tower 1 of the World Trade Center supported by three pedestals representing firefighters, law enforcement officers and paramedics, said Deputy Greg Dotson, who is spearheading the project. The artifact situated at a 30-degree angle will point toward New York City. 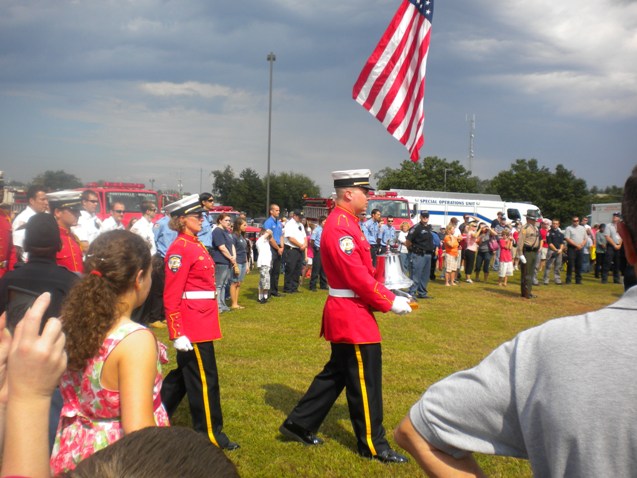 (above photo) Despite the storm clouds, there was a break in the weather while the Murfreesboro Fire Department's Honor Guard brought the "fire bell" to ring in memory of those who made the supreme sacrifice on 9/11.

A two-level concrete base will hold the memorial with the “Pledge of Allegiance” inscribed around it. Four urns on each corner will represent the innocent citizens flying on four airplanes the terrorists crashed into the two World Trade Center towers, the Pentagon and in Pennsylvania. The flight numbers will be inscribed on a brass band around each urn.

(above photo) 21-gun salute given by members of MTSU Police, Murfreesboro Police, Tennessee Highway Patrol, Rutherford County Sheriffs Office, Smyrna Police and La Vergne Police. Members of Rolling Thunder are on the right side of the picture.

Four flagpoles will stand at each corner flying the U.S. and state of Tennessee flags with rotating 9-11 flags and rotating flags for each branch of the military.