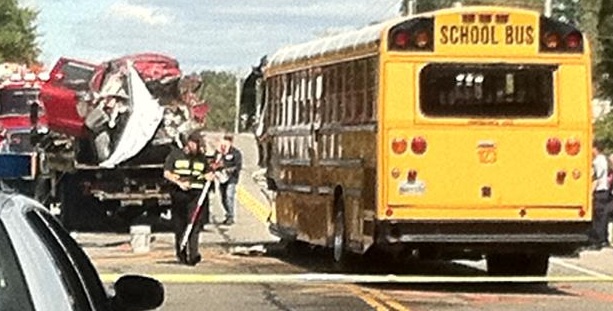 The Tennessee Highway Patrol confirms that a bus carrying the Oakland High School band has been involved in an accident along Highway 231 at Cedar Forest Road in Wilson County.  The bus, which was transporting 50 students, collided with a Dodge Durango around 10:45 Saturday morning (10/1/2011).  The driver of the Durango, identified as Michael L. Henry, age 60 of Pleasant Shade, TN, died at the scene, the bus driver, identified as Holly Lane, age 31 of Murfreesboro, has been taken to Vanderbilt for non life threatening injuries, and one student has been transported to Vanderbilt as well, in unconfirmed condition.  Wilson County Emergency Management adds that nine students were transported to University Medical Center in Lebanon for minor injuries as well.  The students were headed to a band competition at Lebanon High School. The bus was headed north on Highway 231 from Murfreesboro to Lebanon when it was hit. Witnesses said the SUV drifted across the center line. A second bus of Oakland students was behind the lead unit and many saw the deadly crash occur. Tennessee Highway Patrol is in charge of this incident, and will pass along more information as it becomes available.
Sections: News