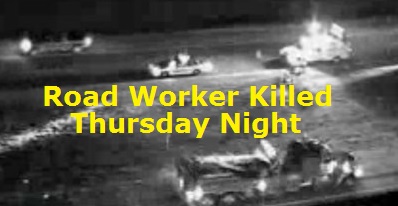 Here's an update on the tragic death of a highway worker who was killed around 5:15 Thursday (4/13/2017) night here in Murfreesboro. 31-year old John M. Gray, III was killed when hit by a vehicle on I-24 eastbound, near the Joe B. Jackson Parkway exit.

Tennessee Highway Patrol Trooper Alex Campbell says that the Millington, Tennessee man was working in a construction zone and was in the median of I-24 when the driver of a 2007 Toyota Yaris, traveling east bound (toward Chattanooga), ran off the left shoulder of the road and struck a worker (pedestrian). That car continued until it slammed into the rear of a 2006 Ford F-350 construction pickup truck that was unoccupied and parked in the median.

The driver of the Toyota was 65-year old Roxan Evelyn Brown of Buford, Georgia.

No citations were issued, but criminal charges are pending.

Gray was a contract road worker with Superior Traffic Control and was reportedly placing construction signs in the median when the Georgia woman reportedly swerved into the median to avoid hitting the stopped cars on I-24, and killed the man in the "construction zone".