Thank You TREY NUNLEY For Leadership 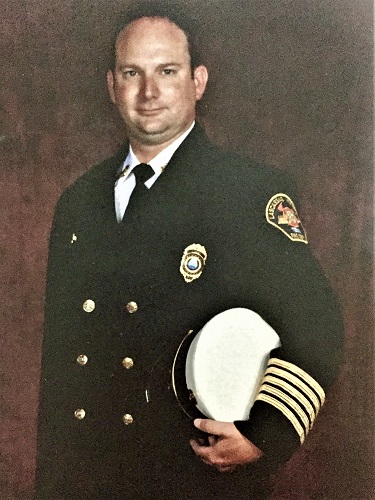 Joe "Trey" E. Nunley, III is retiring after 25-years of volunteer service to the community with the Lascassas Fire Department.

In that period of time, Trey built the Milton station as well as the current Lascassas station. He also started the popular Lascassas Fire Department Fish Fry.

He has come a long way from the cold day in December, 1991 when he was a junior firefighter at Lascassas Volunteer Fire Department. Three-years later, Trey graduated from the Junior Firefighter program and was promoted to firefighter.

In April, 1998, he graduated from the Tennesse State Fire School's "Basic Firefighting" program. Just 3-months later Trey was licensed as a first responder through the Tennessee Division of Emergency Medical Services. And in August of that year, he was certified as firefighter 1 by the State Commission of Firefighting.

In March, 1999, Trey was promoted to lieutenant at the Lascassas Fire Department, and was the youngest company officer under Chief Farley.

He received the vehicle extrication certificate in April, 1999, and graduated from Smoke Diver School 6-months later. In March, 2000 Trey was promoted to captain.

In September, 2008 he became assistant chief, and then to chief of the Lascassas Fire Department in April, 2009.

Trey Nunley also earned a grant in 2004 that allowed the department to purchase a new tanker truck.

Over his years of service, he lower the ISO rating for Lascassas from a 9 to a 5. In addition, he helped to launch numerous careers for young men and women into the public service field.

His love to help others was not limited to Rutherford County. Trey Nunley also responded to Nashville and Ashland City during the floods of 2010. He fought a major tobacco warehouse blaze in Hartsville, and then in 2016 he helped in Gatlinburg during those tragic fires.

Thank you Joe "Trey" E. Nunley, III for your service to our community.