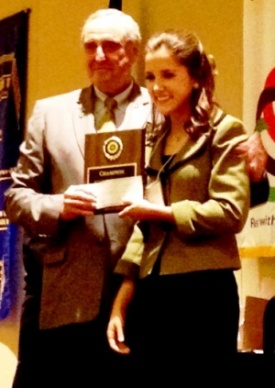 Murfreesboro Rotary President Bart Walker commented, "I knew Emily would win after hearing her compete in the first phase of district competition a few weeks ago. This is one of many ways Rotary encourages area youth to strengthen their speaking and leadership skills."

Emily is the daughter of Craig and Stacey Hamby of Murfreesboro. Craig is with State Farm's regional office and Stacey is with Reeves-Sain Medical.

How Did the "4 Way Test" Begin 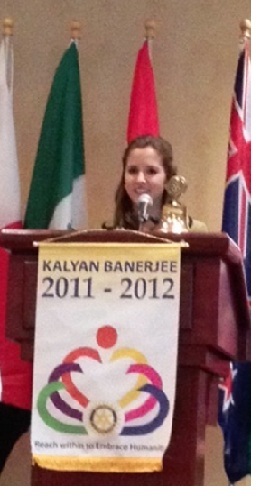 What is now known as "Rotary's 4-Way Test" was born out of crisis. In 1932 Herbert J. Taylor penned: "These are the things we think, say and do. (1) Is it the truth, (2) is it fair to all concerned, (3) will it build goodwill and better friendships, and (4) will it be beneficial to all concerned?" This was not originally written for Rotary, but Taylor wrote it in 1932 for his bankrupt Club Aluminum Company. It rallied employees and within five-years Club Aluminum was out of the red and growing strong.

Taylor went on to become president of the Rotary Club of Chicago in 1939, and international president in 1954. He gave the "4 Way Test" to Rotary International and it was adopted in January, 1943.