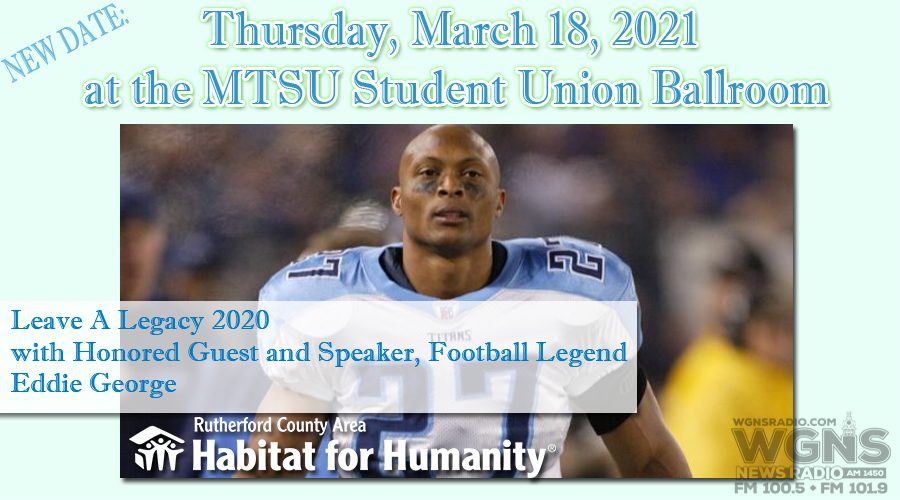 Murfreesboro, TN – In the wake of the Coronavirus Rutherford County Area Habitat for Humanity (RCHFH) has decided to postpone the 5th Annual Leave A Legacy event featuring football legend Eddie George to March 18, 2021.

ADVERTISEMENT
Tickets for the dinner and event are still available through Eventbrite. Sponsorships and a limited number of VIP Tickets are also available. The Presenting Sponsor for the event is Ole South Properties.

From the football field to the board room, Broadway musicals to graduate business school, Eddie George personifies what we think of when we hear the term Renaissance Man. His football accomplishments are legendary.  A Heisman trophy winner and first round draft choice out of Ohio State, earning Rookie of the Year honors in 1996, it only got better. Starting running back for the Tennessee Titans until 2003, he was selected to four consecutive Pro Bowls, still owns virtually every Titans’ rushing record, and led his team to Super Bowl XXXIV before retiring after a final campaign in 2004 with the Dallas Cowboys.

George will talk about how perseverance and overcoming obstacles framed his career and how people can use the same determination to realize their life goals. He admires how Habitat for Humanity prepares and empowers families and individuals to become homeowners and achieve financial stability for themselves and their children.