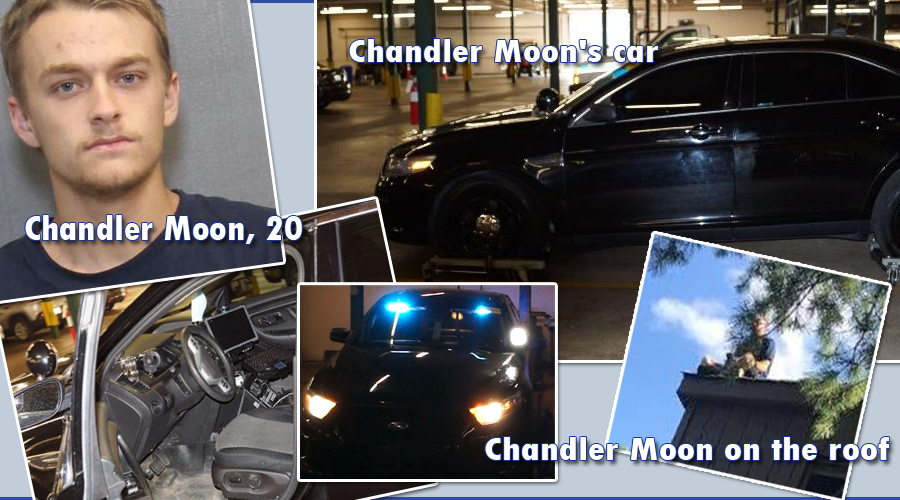 In Nashville, two stolen police car two-way radios, a stolen fire department portable radio, stolen government license plates, and a black Ford Taurus outfitted to look exactly like a Metro Nashville Police Department unmarked car with blue lights and a siren. Those are among the elements of the investigation involving Chandler Moon, 20, of Longhunter Court, who was arrested and charged today by the U.S. Attorney’s Office with unlawful gun possession by a convicted felon.

Specialized Investigations Division detectives arrested Moon last Thursday after executing a search warrant at his residence as part of the month-long investigation into his activities by the Crime Gun Unit. Seized were a Glock .40 caliber pistol, stolen police and fire department radios, stolen State of Tennessee government license plates, a siren box and light bars (at least some of the MNPD equipment is believed to have been taken during the burglary of an MNPD car parked at a local repair shop on the weekend of May 30th). Also impounded last Thursday was Moon’s Ford Taurus outfitted with blue lights and spotlights to resemble an MNPD unmarked car. Inside the vehicle were a stolen police car license plate and a jacket with MNPD insignias that is believed to have been stolen from a uniform store.

ADVERTISEMENT
Moon was not home during the execution of the search warrant, but returned a few hours later. Undercover detectives watched him enter the house through a rear door and made announcements for him to come outside and surrender. Instead, Moon crawled through a second story window and perched himself on the roof. A fire department ladder truck had to be summoned to get him down. He was charged last Thursday with unlawful gun possession by a convicted felon, falsely reporting that one of his cars had been stolen, and evading arrest. Moon posted bond but remained under investigation by both the Specialized Investigations Division and the FBI.

In January 2019, Moon was arrested in Kentucky for impersonating a police officer and receiving stolen property after driving carelessly in an SUV with emergency lights activated. He was given a five year term of pretrial diversion earlier this year, during which he is prohibited from having a firearm. He was also convicted of a felony in Georgia in 2017 and is prohibited from possessing a gun.

The MNPD has reports of Moon’s Taurus driving recklessly with blue lights and siren activated on I-24 in Nashville as late as July 4th. Anyone who was pulled over by Moon as he impersonated law enforcement is asked to contact Crime Stoppers at 615-742-7463. No one has reported such thus far.

Moon remains in federal custody. He will appear for a detention hearing in U.S. District Court next week.