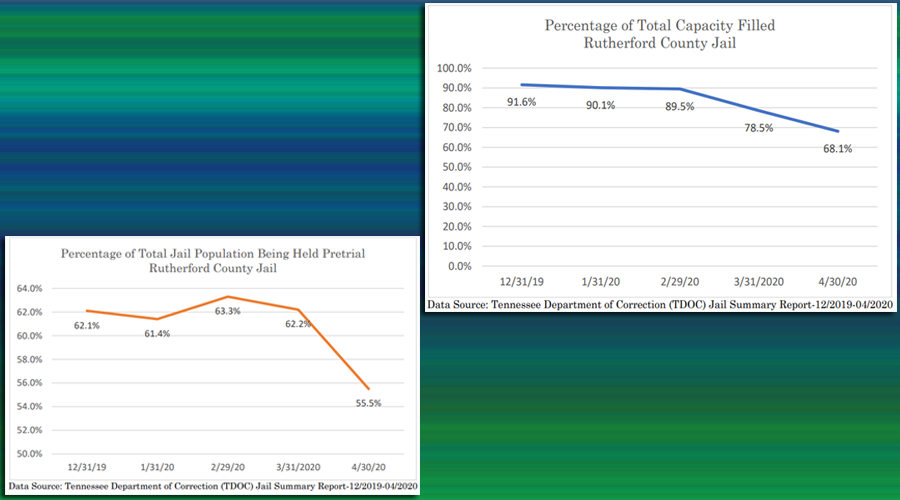 The American Civil Liberties Union of Tennessee released a comprehensive, statewide report that illustrates the cumulative impact of varying efforts to decarcerate local jails by advocates and stakeholders across the criminal justice system in the wake of the COVID-19 pandemic. The report highlights changes in jail populations in every county in the state from December 2019 through April 2020.

Public health experts agree that as COVID-19 continues to spread, individuals who are incarcerated in local jail facilities are especially vulnerable. Infectious diseases like COVID-19 are likely to rapidly spread in jails because jails often have inadequate personal protective equipment, methods of sanitation, or, in some cases, even soap for the people living and working behind bars. In addition, the social distancing measures recommended by the Centers for Disease Control are virtually impossible to implement in carceral settings. A recent epidemiological study illustrates how a potential outbreak of COVID-19 in county jails could be deadly for not only for the many people who are incarcerated and work in those facilities, but for the broader communities surrounding them.
ADVERTISEMENT

"Our report sheds light on the fact that a quarter of Tennessee's jails were still operating at 75 percent of their capacity or above at the end of April, including nine that were at or even over their full capacity. Clearly, we still have a long way to go to protect people living and working in Tennessee jails and our failure to do so will disproportionately hurt rural communities and communities of color in our state," said Hedy Weinberg, ACLU-TN executive director.

"At the same time," Weinberg continued, "our report also illustrates that many Tennessee counties have successfully and safely reduced the number of people in their jails by taking steps such as releasing those incarcerated simply because they cannot afford to post bail and increasing the use of citations over arrests – illustrating a path toward reducing our costly reliance on incarceration during the pandemic and beyond.”

The report also provides recommendations for further reducing the population of Tennessee jails to reduce the spread of COVID-19, such as the release of medically vulnerable people, police reducing arrests for minor offenses, prosecutors declining to prosecute arrests for low-level charges and eliminating prosecution for technical violations of probation, and courts ordering pretrial release without conditions in all cases where release poses no risk to safety.

The report is available at: https://www.aclu-tn.org/wp-content/uploads/2020/07/ACLU-TN-Jail-Population-Report-F.pdf