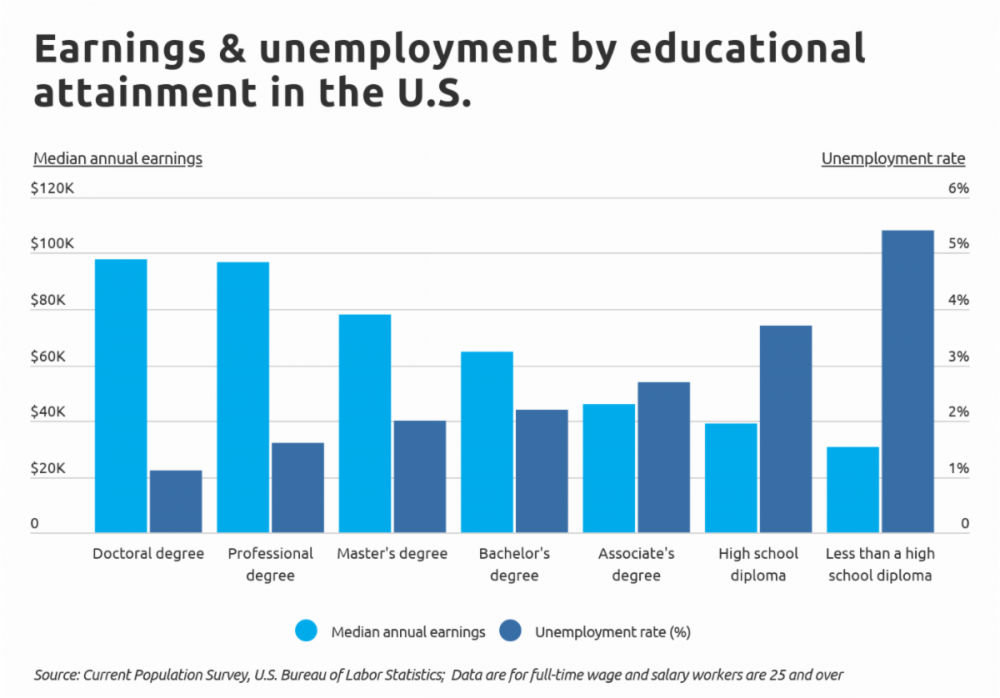 Over the past ten years, undergraduate enrollment has been on the decline. According to the National Center for Education Statistics, total undergraduate enrollment decreased by 8 percent between 2010 and 2018. As the COVID-19 pandemic further disrupts higher education and employment prospects, many Americans are evaluating whether a four-year degree is the best path to a successful career.

According to the Bureau of Labor Statistics, higher levels of education generally correspond to better employment opportunities. In 2019, the overall unemployment rate was 3 percent, but that number was only 2.2 percent for college graduates, 2 percent for master’s degree holders, and 1.1 percent for those with a doctorate. While unemployment rates have risen sharply this year, research suggests that workers with more education have generally been less affected.

Similarly, individuals with an undergraduate or advanced degree have significantly higher earnings than those without. While median annual earnings for full-time workers across all education levels in 2019 was $39,810, that for bachelor’s degree holders was $64,896, and the median salary for both doctoral and professional degree holders was nearly six figures.

Although higher education usually leads to a higher salary, the rising cost of education has created a precarious situation for many bachelor’s degree holders. Since 2003, total student loan debt held by American households increased by more than 500 percent. Total outstanding student loan debt currently sits at a staggering $1.54 trillion, second only to mortgage debt. In addition, the delinquency rate on student loans was nearly 11 percent in the first quarter of 2020—the highest rate across all loan types tracked by the Federal Reserve Bank of New York. Even if degree holders stand to earn more after graduation, the difference is not sufficient to cover loan payments for many borrowers.

While going to college might seem like the norm, more than 62 percent of American workers do not have a bachelor’s degree. However, the percentage of college graduates varies widely across states. For example, Massachusetts is the only state in which more than half of the labor force has a college degree. By contrast, in several states in the South and non-coastal West, more than 70 percent of workers do not have a college degree. The states with the lowest percentage of degree holders include Nevada (73.5 percent), West Virginia (72.3 percent), Arkansas (72 percent), and Mississippi (71.3 percent).

In some states, such as California, there is an enormous spread in educational attainment across major metropolitan areas due to differences in local economies. For example, over 80 percent of workers in the Bakersfield and Stockton metros do not have a bachelor’s degree, compared to just over 40 percent of workers in nearby San Jose and San Francisco. Whereas Bakersfield and Stockton have disproportionately high numbers of agricultural jobs compared to other major metropolitan areas, San Francisco and San Jose have some of the highest concentrations of workers in computer and mathematical fields, according to U.S. Census data.

The burden of student loan debt, as well as the economic uncertainty of COVID-19, raise the question of whether it’s possible to have a lucrative career without a four-year degree. Fortunately, many jobs that don’t require a bachelor’s degree pay roughly two to three times more than the national median of $39,810 per year.

To find the highest-paying jobs that don’t require a four-year degree, researchers at Self Financial analyzed median wage data from the U.S. Bureau of Labor Statistics Employment Projections Report. For each job, they also included the projected job growth rate from 2018-2028. Notably, these projections are the most recent available, but were made by the BLS prior to this year. For reference, the projected employment growth between 2018 and 2028 across all occupations is 5.2 percent.

For more information, a detailed methodology, and complete results, you can find the original report on Self Financial’s website: https://www.self.inc/blog/highest-paying-jobs-no-bachelors-degree