Cheapest July at the pump for state in 16 years 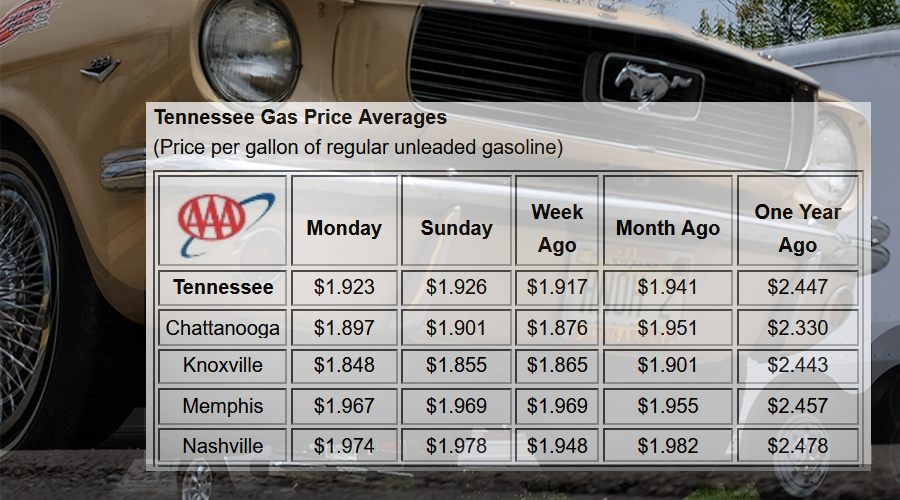 “Tennessee motorists saw the cheapest monthly average for July since 2004,” said Megan Cooper, spokesperson, AAA - The Auto Club Group. “While we expect to see typical fluctuation, August gas prices are not expected to spike, especially amid increases in COVID-19 cases."

The monthly gas price average for July was $1.94 - that's eight cents more expensive than last month's average of $1.86 and 55 cents less expensive than July 2019. Last month was the cheapest July at the pump for Tennesseans in 16 years

On the week, the national gas price average held steady at $2.18 as the majority of state averages saw minimal impact at the pump. With the exception of a few outliers -  Florida (+10 cents), Utah (+10 cents) and Idaho (+5 cents) – state averages either decreased by four cents or less or increased by no more than two pennies.

Gas prices are trending cheaper despite an increase in demand. Up 3% over last week, gasoline demand measured at 8.8 million b/d - the highest reading since the pandemic started. Though, according to the Energy Information Administration (EIA), year-over-year demand is down about 8%.

Today’s national average, which is one cent more than last month and 53 cents cheaper than last year, has been largely unaffected by Tropical Storm Isaias. The storm, according to the National Hurricane Center, is likely to regain hurricane strength before reaching the coast between northeastern South Carolina and southern North Carolina later today. Given lower than normal U.S. gasoline demand and healthy stock levels, gas prices nationally are not likely to be impacted by Isaias.

At the end of Friday’s formal trading session, WTI increased by 35 cents to settle at $40.27 per barrel. Domestic crude prices increased after EIA's latest weekly report revealed that total domestic crude inventories decreased by 10.6 million bbl, bringing the current total to 526 million bbl. The price increase, amid increasing gasoline demand, up from 8.55 million b/d to 8.81 million b/d in the new EIA report, could mean that the domestic crude market is meeting demand and production is stabilizing as coronavirus infections continue to increase worldwide. If crude supplies continue to decline alongside rising demand, domestic crude prices could continue to increase this week.