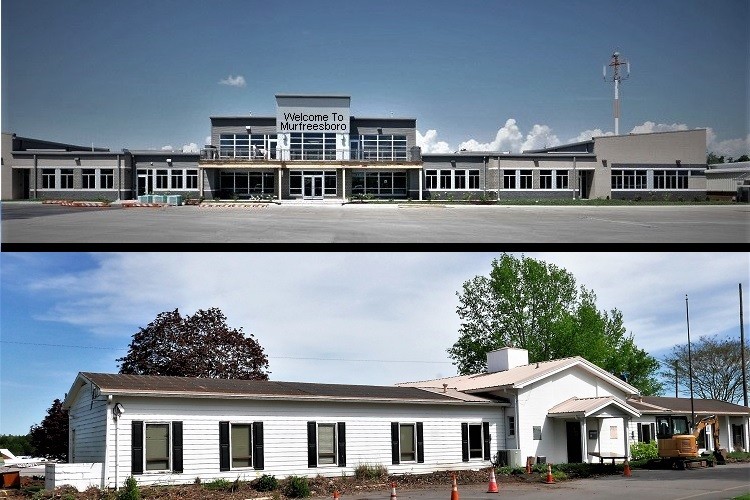 (MURFREESBORO) It was early spring 2019 when crews started demolishing the old 1952 era airport terminal. Now, we're just weeks away from the benefits of a beautiful $4.5-million Murfreesboro Municipal Airport Terminal that will make a positive first impression on those who visit the Heart of Tennessee.

Airport Manager Chad Gehrke (pronounced Gur-Key) told WGNS News, "We want the terminal to present air travelers with the best first impression possible and to fill the needs of our growing city for the next half-century."

As you drive-up to the new terminal entrance, there is a circular drive-through covered portico that allows passenger drop-off during inclement weather. In addition, there is a large amount of vehicle parking in the circular area where the flag pole is currently located. The concrete area on the outside of the circle will have a giant compass burned into the surface.

Gehrke noted that they will start moving into the new terminal around the first of September.

Our city leaders practiced SHOPPING LOCAL, and chose Blake Smith and the team at Murfreesboro-based Smith Design Build, a commercial building contractor, and Nashville-based architectural firm Lowen+Associates, LLC. They teamed-up on the design to meet the unique needs of the municipal airport.

The spacious main lobby has plenty of seating and a two-story tall sloped ceiling. There is a ground level and second floor indoor and outdoor observation deck. You get to the second level with a beautiful double staircase from opposite directions and meeting in the center.

Numerous video screens will be placed around the terminal showing weather and activities of interest in Murfreesboro. Gehrke also hopes the airport will be able to spotlight local art with shows promoted to both air travel visitors and local residents.

The airport caters to the Aerospace Department at Middle Tennessee State University and Air Methods LifeFlight emergency medical transport for Vanderbilt University Medical Center. Murfreesboro has a land lease with TDK Hangar, located in a 16,400-square-foot hangar and 4,000-square-feet of office space.

Much of the northside of the new terminal is devoted to new technology-filled classroom space for MTSU, along with conference rooms and luxurious rest and shower areas for visiting pilots.

Gehrke noted, "When pilots fly corporate executives here, they have a large amount of time on their hands. We want to make certain that they can play golf and then come back, relax and shower before flying back home."

Other red-carpet treatment for pilots and visitors is a courtesy vehicle to use while enjoying the Heart of Tennessee.

Plan Next Meeting At Airport

A catering kitchen with ample storage can serve a large leasable Business Conference Center accommodating 75 people. The Center will provide patrons with a view of the airfield.

"The goal is to be able to use the leasable space for catered events," added Gehrke. "We feel strongly that the business and higher education community will utilize this space as it is a focal point for air travelers and the first impression air travelers see as they visit Murfreesboro."

Gehrke commented, "This is our community's airport, but at this time we plan to practice social distancing until COVID-19 is behind us. With that in mind, we plan on delaying grand openings until that time."

The next project is a structure on the airport property and just north of the new terminal. Ground breaking for the facility to serve Mike Jones Aircraft Sales is next.

For those with knowledge about aircraft, the name Mike Jones has a national reputation for renovating Piper Navajos, along with on-going maintenance.

NewsRadio WGNS will keep you informed as to when the grand opening will take place, along with other future developments at the Murfreesboro Municipal Airport.