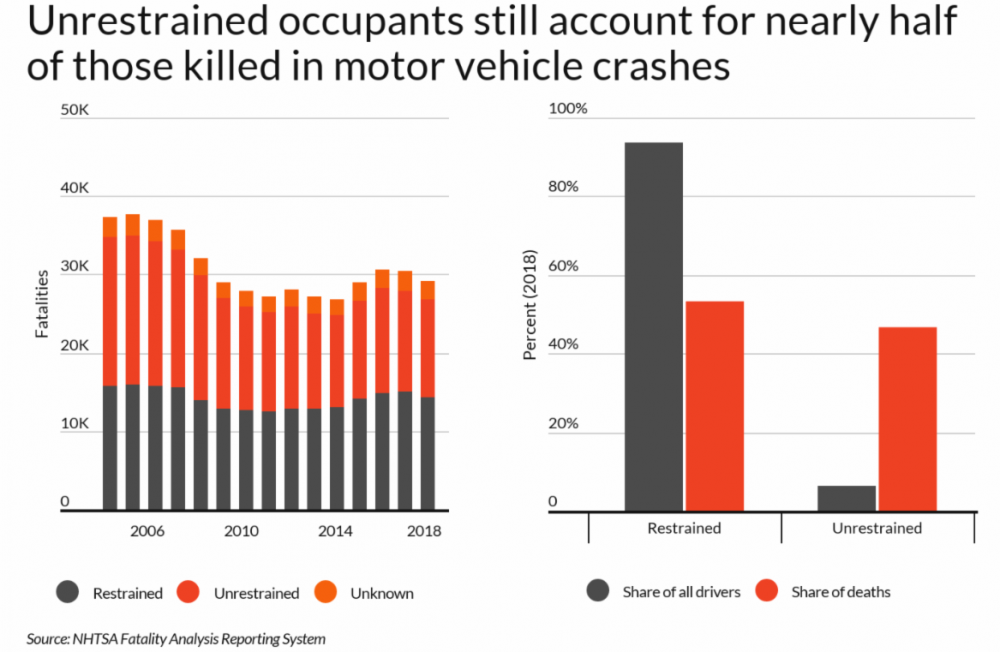 The number of motor vehicle fatalities has been trending down for decades, driven in large part by more people wearing seat belts. In 2004, more than 19,000 occupants killed in car crashes were unrestrained at the time, compared to 12,426 in 2018. While data from the Centers for Disease Control and Prevention indicates that just 6.3 percent of U.S. adults don’t wear a seat belt all (or most) of the time, unrestrained occupants still account for nearly half of individuals killed in car crashes, according to the National Highway Traffic Safety Administration.

ADVERTISEMENT
Location also plays a role in the widespread adoption of seat belts. In general, states with large rural populations are more likely to report large proportions of residents not wearing seat belts. For example, adults in New Hampshire and South Dakota—which have some of the smallest urban populations—are more than twice as likely as average to report not wearing seat belts (17.2 percent and 15.0 percent, respectively). By contrast, California, Oregon, and Washigton—where more than eight in 10 residents live in urban areas—report the highest rates of restraint use in the country.

To find which states’ residents are least likely to wear seat belts, researchers at CoPilot, a car shopping app, analyzed restraint use statistics from the CDC’s Behavioral Risk Factor Surveillance System. They also analyzed how many unrestrained occupants were killed in car crashes in each state from 2016 to 2018.

In Tennessee, 6.1% of commuters don't wear seat belts. Shockingly, these unrestrained commuters still comprise 41.0% of those killed in Tennessee car accidents. Here is a summary of the data for Tennessee:

Share of adults who don't always wear a seat belt: 6.1%

For more information, a detailed methodology, and complete results, you can find the original report on CoPilot’s website: https://www.copilotsearch.com/posts/cities-that-dont-wear-seatbelts/