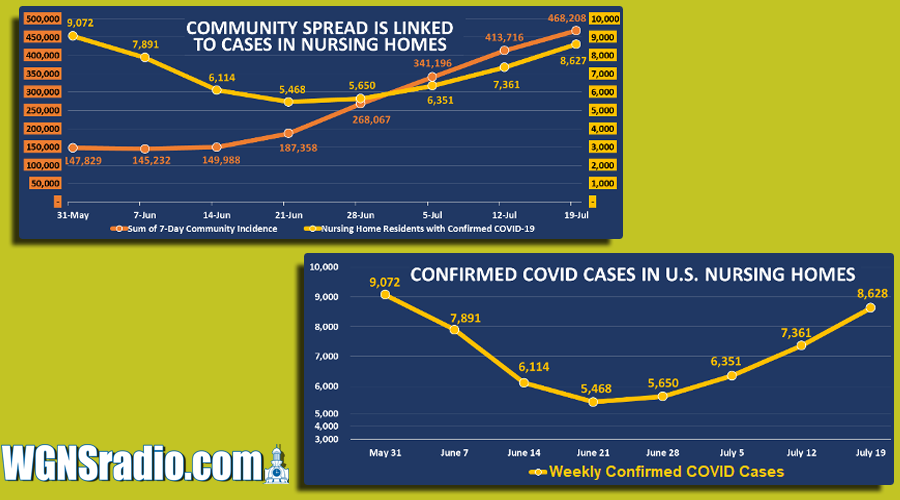 The American Health Care Association and National Center for Assisted Living (AHCA/NCAL), representing more than 14,000 nursing homes and assisted living communities across the country that provide care to approximately five million people each year, released a report today showing nursing homes in the U.S. have experienced an alarming spike in new COVID cases due to community spread among the general population according to recent data recently released from the Centers for Medicare & Medicaid Services (CMS).

The CMS data shows COVID cases in nursing homes significantly increased last month after having dropped significantly throughout the month of June.

ADVERTISEMENT
As experts have repeatedly noted, COVID-19 cases in a surrounding community is a top factor in outbreaks in nursing homes. Dr. David Grabowski, professor of Health Care Policy, Harvard Medical School recently stated, “According to preliminary research presented, larger facilities located in urban areas with large populations, particularly in counties with a higher prevalence of COVID-19 cases, were more likely to have reported cases.”

“With the recent major spikes of COVID cases in many states across the country, we were very concerned this trend would lead to an increase in cases in nursing homes and unfortunately it has,” stated Mark Parkinson, President and CEO of the American Health Care Association and National Center for Assisted Living. “This is especially troubling since many nursing homes and other long term care facilities are still unable to acquire the personal protective equipment and testing they need to fully combat this virus.”

The report also showed COVID-related deaths in nursing homes had declined significantly but have started to uptick again in recent weeks.

Parkinson and AHCA/NCAL recently sent a letter to the National Governors Association (NGA) warning states of imminent outbreaks at nursing homes and assisted living facilities given the major spikes in new cases in several states across the U.S., combined with serious PPE shortages and significant delays in getting testing results for long term care residents and caregivers which has been taking up to five days or more.

“Given the fact we are several months into the response of this pandemic and the lack of PPE supplies is still an issue is very concerning. We request governors and state public health agencies to help secure and direct more PPE supplies to nursing homes and assisted living communities, especially N95 masks,” Parkinson wrote in the letter.

Parkinson is also urging Congress for an additional $100 billion for the U.S. Department of Health and Human Services (HHS) Provider Relief Fund, which is accessible for all health care providers impacted by COVID-19, and that a sizeable portion of the fund be dedicated to helping nursing homes and assisted living communities acquire resources associated with protecting vulnerable residents and staff from the virus, including constant testing, PPE and staff support.

“Without adequate funding and resources, the U.S. will end up repeating the same mistakes from several months ago. We need Congress to prioritize our vulnerable seniors and their caregivers in nursing homes and assisted living communities in this upcoming legislation.”
Tags: assisted living covid COVID-19 nursing homes Tennessee TN
Sections: News