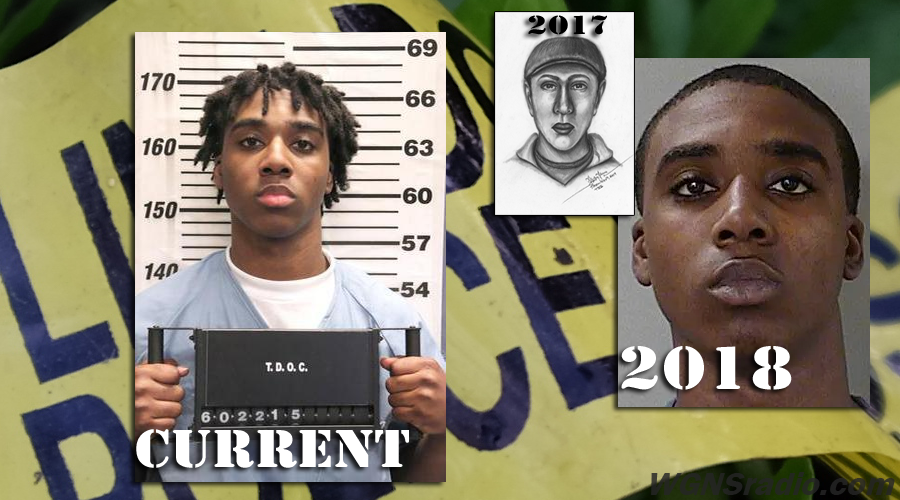 Allen above at different stages during the case

UPDATED: A serial rapist who carried out multiple sexual attacks in Tennessee was sentenced to 25 years in prison for the rape of an elderly Murfreesboro woman.

“This was a very emotional case,”said Special Victims Unit (SVU) Detective Tommy Roberts. “The victim was 85-years-old. She has lived through so many things during her life and to be home, in her driveway, and to be violently attacked, it was sad. The thing that I can’t get over is after the suspect had confessed to us, we asked him why he did it and he stated, ‘I was bored’.”

ADVERTISEMENT
Chriteris Allen, 21, of Jackson, Tennessee, was sentenced by Rutherford County Circuit Court Judge David Bragg at a sentencing hearing Friday, Aug. 21. Allen was found guilty of aggravated rape and robbing the 85-year-old victim at gunpoint at her Sunset Drive home in 2017. He was 18 years old at the time.

“It’s very saddening that crimes like this occur onthe most vulnerable of people,” said SVU Detective Michael Yates. “The victim remained strong and courageous throughout the criminal proceedings. In the end, I am very pleased that we were able to bring justice for these hideous crimes.”

Allen was previously found guilty of raping three women in Jackson in Madison County and sentenced to 44 years in prison. He faces a total of 69 years.

Chriteris is serving his sentence at the Whiteville Correctional Facility in Hardeman County in West Tennessee.

The man accused of raping an elderly Murfreesboro woman three years ago recently appeared before the Rutherford County Courts. His appearance came after he was heard in Jackson, TN where he faced charges there.

19-Year old Chriteris D. Allen was accused of kidnapping and raping a senior citizen at her Mitchel Neilson area home in 2017. After the reported attack, he allegedly left the area and headed to Jackson, TN.

In Jackson, the same man was arrested for attacking two different female victims. After Allen was accused of kidnapping and sexual assault in West Tennessee, he was developed as a suspect in Murfreesboro. But, prior to appearing in the courts here, he had to appear in court in Jackson, TN.

In Jackson, he was found guilty and sentenced to 44 years in prison.

Once the West Tennessee case ended, Allen had charges to face in Murfreesboro for the rape of an 85-year old woman.

Looking back to 2017, Allen robbed and raped an 85-year-old Sunset Avenue woman at her home in Murfreesboro. Detectives Michael Yates and Tommy Roberts with the Special Victims Unit were assigned to the case. Evidence collected at the scene included DNA that was matched to Allen.

This month, a Rutherford County Jury found Allen guilty of aggravated rape in Circuit Court. On August 21, 2020 he was sentenced to another 25 years in prison - which is on top of the 44 years received in Jackson.
Tags: Allen attack Chriteris Allen elderly Murfreesboro news police rape senior SVU Tennessee TN victim
Sections: News