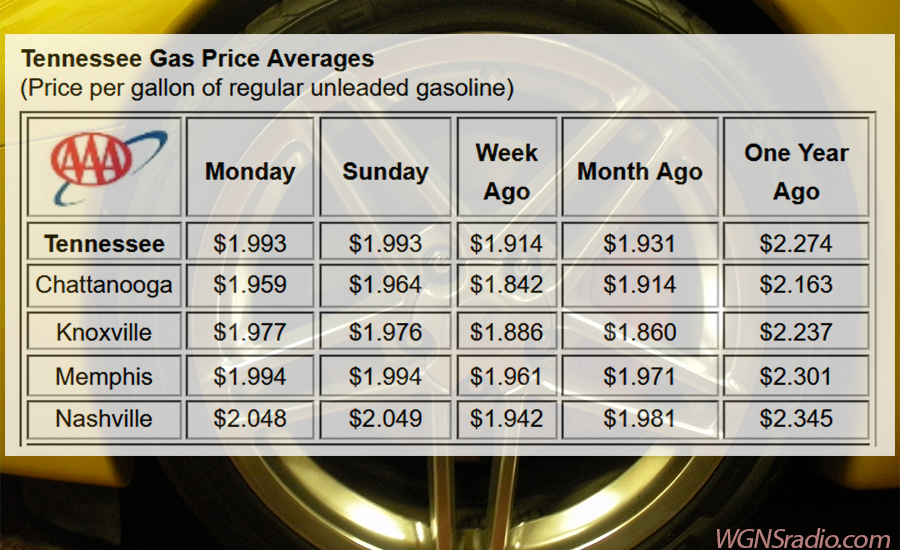 The Tennessee gas price average jumped eight cents over last week, but has held steady since Hurricane Laura made landfall along the Gulf Coast. The Tennessee Gas Price average is now $1.99 which is six cents more expensive than one month ago and nearly 28 cents less than one year ago.

"It’s typical to see increased demand and more expensive gas prices ahead of a storm, especially one that threatens rigs and refineries in the Gulf of Mexico region,” said Megan Cooper, spokesperson, AAA - The Auto Club Group. “The latest industry reports indicate that facilities in Texas have already begun the restarting process, which means there is no major threat to gasoline stocks. This combined with relatively low demand due to the pandemic should hold prices in check over the coming week."

The monthly gas price average for August was $1.92 - that's nearly two cents cheaper than last month's average of $1.94 and 44 cents less expensive than August 2019. This month's average was the cheapest August at the pump since 2004.

The national gas price average spiked by a nickel on the week to $2.23, but is expected to push cheaper in the week ahead. Pump prices jumped as a result of Hurricane Laura and an increase in demand to one of the highest measurements of the year.

However, operations in the Lake Charles, La., region are still down, and could be for a period of time. This includes the Lake Charles CITGO (440,000 b/d) and Phillip66 (239,400 b/d) facilities. In the Gulf of Mexico, the Bureau of Safety and Environmental Enforcement (BSEE) reports that 70% of current oil production is still shuttered, which is still significant but better when compared to 84% reported when the storm hit.

The second factor pushing prices more expensive in the last week was the Energy Information Administration (EIA) report that gas demand increased from 8.63 million b/d to 9.16 million b/d. While higher than we’ve seen throughout the summer, this estimated rate is 739,000 b/d lower than the rate last year at this time. Moreover, total domestic gasoline supplies decreased by 4.6 million bbl last week to 239.2 million bbl, but the current level is 7.2 million bbl higher than the level at this time last year.

Today’s national average is a nickel more than last month, but 35 cents cheaper than a year ago. On the week, all but five states saw state gas price averages increase. Of those that saw jumps, nearly 20 state averages are 5 to 15 cents more expensive.

At the end of Friday’s formal trading session, WTI decreased by seven cents to settle at $42.97 per barrel. Although crude prices ended the day lower, crude prices increased on the week as Tropical Depression Laura reduced crude production in the Gulf of Mexico. For this week, crude prices may rise again due to a weak U.S. dollar and if prolonged closure of rigs and production platforms tighten domestic crude inventories amid rising demand. However, EIA’s latest weekly report revealed that total domestic crude inventories, currently sitting at 507.8 million bbl, are 80 million bbl higher than where they were during this time in August 2019. The higher level could play a role in stabilizing crude prices.

As of Monday morning, the BSEE Hurricane Response Team reports:

• Personnel are still evacuated from a total of 137 production platforms, 21.31 percent of the 643 manned platforms in the Gulf of Mexico.

• Personnel are still evacuated from 2 rigs (non-dynamically positioned), equivalent to 16.67 percent of the 12 rigs of this type currently operating in the Gulf.

• From operator reports, BSEE estimates that approximately 70% percent of the current oil production in the Gulf of Mexico remains shuttered.