RCECD 9-1-1 Administration and Training Center to be Named After John D. Hood 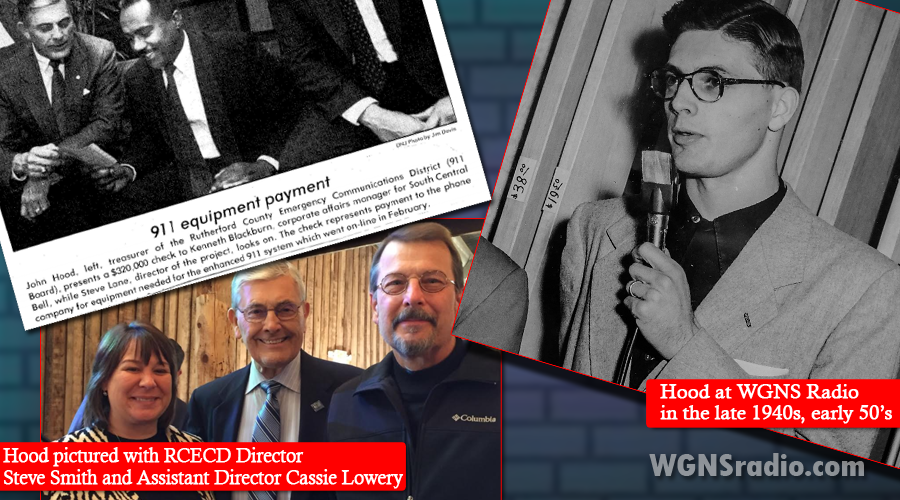 Rutherford County, TN—Rutherford County Emergency Communications District’s (RCECD) 9-1-1 Administration and Training Center will be displaying a new name on Friday, September 11. The center is being named for long-time board member and treasurer John D. Hood.

During a small virtual ceremony just before the 9-1-1 Board meeting, the building will be dedicated in Hood’s honor, and the new signage will be unveiled as, the “John D. Hood 9-1-1 Administration and Training Center.”

ADVERTISEMENT
“We could not think of anyone more deserving of this honor,” said RCECD Director Steve Smith. “Mr. Hood has been such an incredible figure representing the Rutherford County community over the years, and he has been a tremendous asset to our communications team.”

Hood has been board member and treasurer since the group’s inception in 1986. He is the longest-standing member in the board’s history.

Rutherford County Mayor Bill Ketron commented, “You cannot be from Rutherford County without hearing the name ‘John Hood’ at least once. He has served this community well in many different ways. I was proud to nominate John for this honor for his years of service to the 9-1-1 Board. His name and his impact will be remembered for years to come.”

John D. Hood was born in Murfreesboro, Tennessee to Emil and Christine Hood.  He attended Crichlow Elementary, Central High School and graduated from Middle Tennessee State University in 1954 with an undergraduate degree in social science.  While attending MTSU, John worked at a local radio station, WGNS, as a staff announcer.  After receiving his undergraduate degree, John spent two years in the Army.  After leaving the military, John returned to the area to work as the news and program director for WMTS radio.  John also worked for 10 years at MTSU as the director of development and then as an assistant to the president.  While working at MTSU, John graduated with a master’s degree in education.  After leaving MTSU in 1976, John worked in the banking industry for the next twenty years.  In 1996, John was elected as a state representative for the 48th District, serving in that capacity for twelve years.  In 2008, he returned to MTSU where he is currently the director of government and community affairs.

John has been honored for his service to the community over the years.  In 2010, he was inducted into the Court Of Honor at the National Headquarters.  In 2012, he received the Murfreesboro City Schools Foundation Excellence in Education award.  John was named the Rutherford County Chamber Of Commerce Business Legend Of The Year for 2013. In 2016, he was inducted into the Tennessee Journalism Hall Of Fame and in 2017, he was honored at the Heart of Tennessee Chapter of the American Red Cross Heroes Breakfast.