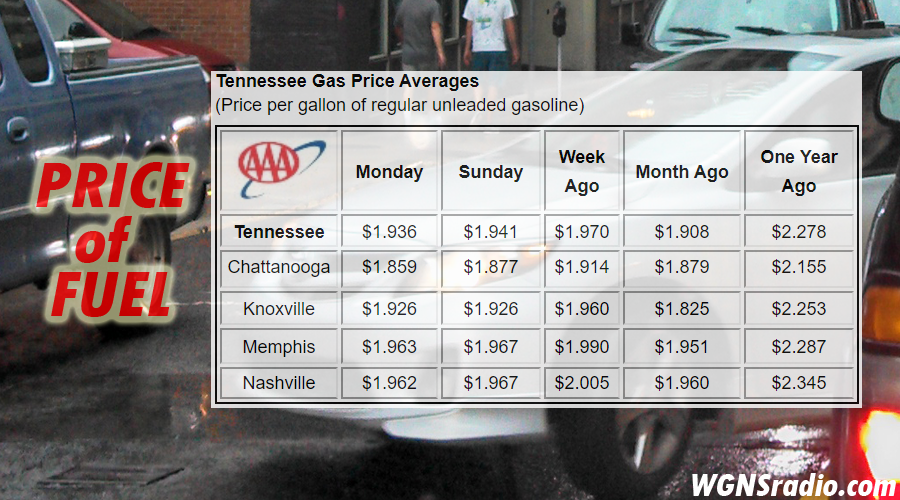 “We have not seen much of an impact on gasoline prices ahead of the storm thus far, but that could change this week depending on the severity of the storm,” said Megan Cooper, spokesperson, AAA - The Auto Club Group. “Some price fluctuation is typical any time a storm threatens the Gulf Coast region, however, any pump price impacts will likely be contained in the region and not have a national impact. ”

The latest Energy Information Administration (EIA) report measures gasoline demand at 8.3 million b/d, which is the lowest level since mid-June. As demand dropped for a second week, so did gasoline supply levels – down nearly 3 million bbl to 231 million bbl. While consistently decreasing week-over-week, supplies also sit at a 3 million bbl year-over-year surplus.

Today’s national gas price average is $2.19, which is three cents less than last week, two cents more than a month ago, but 37 cents cheaper than mid-September last year. On the week, all states saw gas prices decrease or stabilize at the pump. States with the largest declines are paying a nickel to a dime less, but the majority of state averages pushed cheaper by a few pennies since last Monday.

Mid-September is typically a point in the year that ushers in cheaper gas prices due to the switchover at gas stations from summer-blend to winter-blend, which is cheaper to produce. The difference between the two blends comes down to Reid Vapor Pressure (RVP), which is a measure of how easily the fuel evaporates at a given temperature. The higher – or more volatile - the RVP, the more able it is to evaporate at low temperatures. Winter-blend has a higher RVP which allows the fuel to evaporate at low temperatures for the engine to operate properly, especially when the engine is cold. If the RVP is too low on a frigid day, the vehicle will be hard to start and once started, will run rough.

The National Hurricane Center is currently tracking a number of tropical storms and depressions. Tropical Storm Sally is expected to produce life-threatening storm surge and hurricane-force winds for the northern Gulf Coast starting later today. Sally has already forced at least one refinery shutdown in Louisiana at Phillips 66. Others are watching the storm to determine any operational decisions (see more details in Oil Market Dynamics section). Any pump price impacts will likely be contained to the region and not have a national impact.

At the close of Friday’s formal trading session, WTI increased by three cents to settle at $37.33. Although crude prices made a small gain at the end of the week, the price of crude saw a weekly loss of $2.44. Domestic crude prices decreased after EIA’s weekly report revealed that total domestic crude inventories increased by 2 million bbl, increasing total stocks to 500.4 million bbl. Increasing stocks could signal that crude demand is declining, while production increased by 300,000 b/d last week to 10 million b/d. For this week, crude prices could decrease further amid growing demand concerns.

In related news, Tropical Storm Sally has led some offshore platforms in the Gulf Coast to shutter production. Chevron shut its Blind Faith and Petronius platforms and evacuated the workers, while Royal Dutch Shell said it began shutting some of its offshore drilling operations on Sunday. However, according to reports, its offshore production was unchanged, and all personnel remain on production platforms. Additionally, Murphy Oil shut the Delta House platform because it is in the path of the storm. The exact impact of the storm and how long operations remain shuttered will determine if crude supply will be impacted in the region, which could lead to fluctuations in crude prices. Any crude price impacts will likely be contained to the region and not have a national impact.