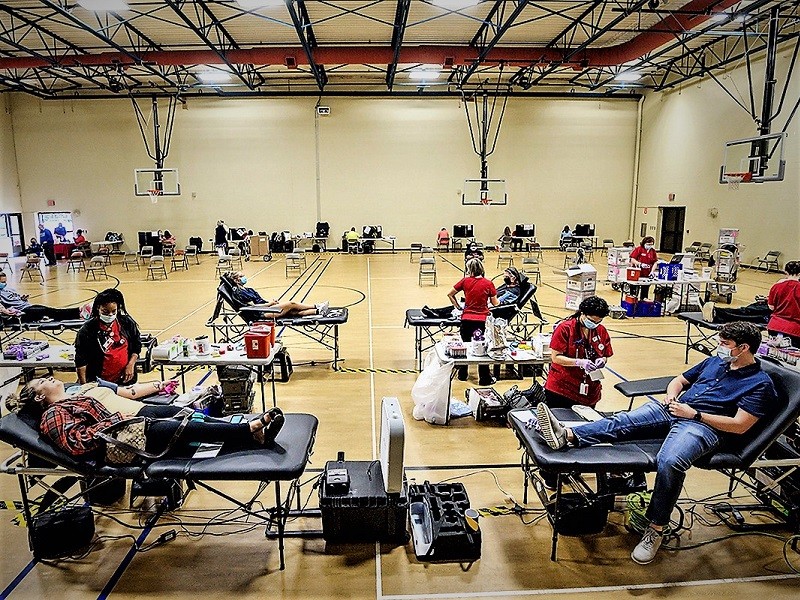 (MURFREESBORO)  Even with the pandemic and a bye for the WKU game, the BLEED BLUE FOR MTSU blood drive was a huge success.

American Red Cross organizers reported that 273 donors masked up and donated 269 units of blood at North Boulevard Church of Christ.

“What an event! And most importantly, (we had) 109 first-time donors! Incredible,” said Gene Baker, senior account manager for donor resources at the Red Cross’ Nashville offices. “Our patients owe you a debt of gratitude!”

Because each unit of blood can help up to three different patients via whole blood, red cells, platelets or plasma, this year’s drive means MTSU donors have saved the lives of everyone in Eagleville, Morrison or Wartrace — take your pick, each’s population is around 720 people — with a few pints of blood left over.

MTSU launched the annual drive in 2010 at the behest of Director of Athletics Chris Massaro, himself a longtime donor, who wanted to create a friendly, and lifesaving, competition with longtime football rival Western Kentucky University, complete with a challenge trophy presented at each year’s game.

This year, when the pandemic left campus event and athletic schedules uncertain, MTSU and Western moved forward with solo plans. MTSU organizers said that because the community’s come to expect the big three-day drive each fall and even plan donation schedules around it, they wanted to keep things as normal as possible.

Campus event capacity restrictions, however, left them searching for a site for the drive. Officials at North Boulevard, which regularly hosts its own community blood drives, opened its gym for MTSU’s three-day solo drive.

“We’re very appreciative to the folks over at North Boulevard Church of Christ. They were so gracious to everybody, to all of our staff and the Red Cross folks,” said Bleed Blue blood drive committee chairman Ray Wiley, MTSU Campus Recreation associate director and a longtime Red Cross volunteer and blood donor.

“We talked about this from the beginning, how with the pandemic and the drive not being on campus, there's a lot of fear and apprehension out there, so we wanted to be realistic on the expectation.

“We really did not know 100 percent what we were going to do and how it was going to be received, and … we were just blown away by the response. Once again our students stepped up, our faculty and staff came out and so did members of the community, and we are so grateful for that.”

Over the drive’s 10-year history, MTSU and WKU supporters have collected 9,800 total pints of blood — that’s 1,225 gallons — since 2010. That means the competition has helped an estimated 29,400 people, or the equivalent of Oak Ridge, Tennessee, which has a current population of 29,156.

“We made it happen and it worked, and thank God it worked, because they (the Red Cross) came into this approximately 2,200 units (of blood) down, and we’ve really put a sizable dent in that,” Wiley said.

“This could be a turning point for them as more things begin to get opened up and we’re one day closer to getting, hopefully, an effective vaccine that people are confident enough to take. Lord willing, this time next year we'll be back on campus and back to a friendly competition between us and WKU.”

Wiley had special thanks for all the donors, attempted donors and volunteers, particularly in a confusing, frightening year with so much pressure on nearly every aspect of their lives.

“It’s a good thing for people to be able to do,” he said. “You come over, eat a piece of pizza, get some juice, get a T-shirt, chat with some good folks, and then you feel good the rest of the day. You’ve made a difference.

“This is why this thing works: we have such a good team of people. When everybody does just a little bit, we can really be a success. It's a labor of love, and I just love it when I see the absolute best come out of our students and of our university. It just warms your heart, and it keeps you excited and ready to do it again.”

Donors can make an appointment anytime by visiting the Red Cross at http://redcrossblood.org and typing their zip code into the red “Find a Blood Drive” box. Appointments also are easy to schedule with the American Red Cross blood app, available at http://ow.ly/ogBb30lJqMl, or by texting "BLOODAPP" to 90999.

Blood supplies are critically low nationwide because of drives canceled by both coronavirus and weather. Some chapters have less than a day’s worth of blood available for their area hospitals.

Information on how the Red Cross is protecting donors from COVID-19 exposure, and how those who’ve recovered from the virus can donate their antibody-boosted plasma to help other patients, is available at http://ow.ly/QNBE30r6blY.

For tips on preparing for a blood donation, visit the Red Cross website at http://ow.ly/AiN07.