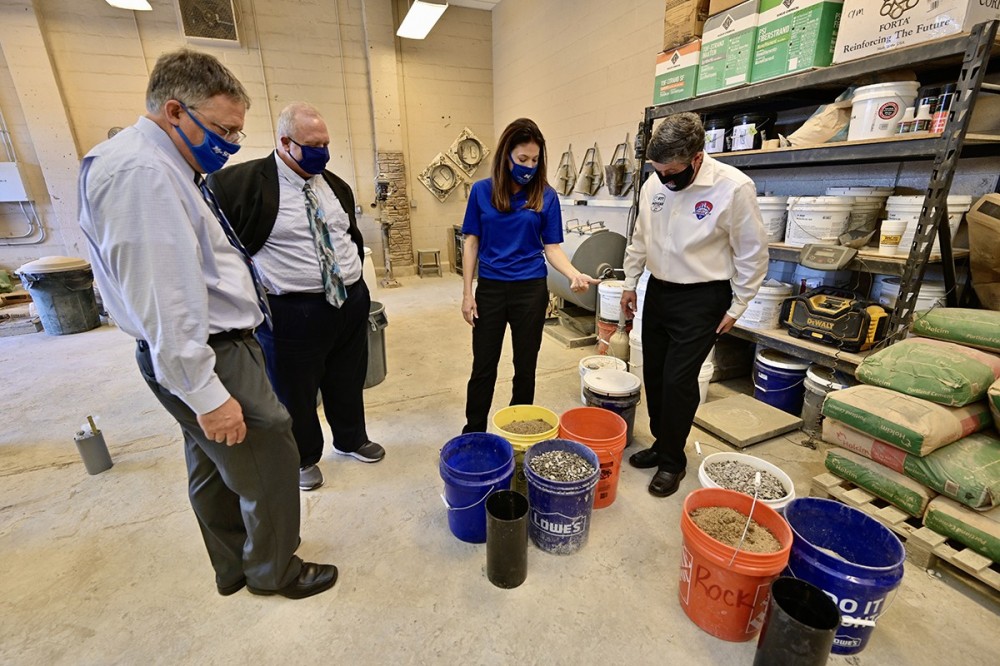 Heather Brown, second from right, MTSU concrete industry professor and former director of the School of Concrete and Construction Management, explains the ingredients from concrete mixes that were to be tested Monday, Nov. 9, inside a lab in the Voorhees Engineering Technology Building. Pictured, from left, are MTSU Provost Mark Byrnes; Bud Fischer, dean of the College of Basic and Applied Sciences; Brown; and Matt Crews, MTSU alumnus and CEO of the Music City Grand Prix. MTSU and the Grand Prix signed a memorandum of understanding Monday formalizing their partnership in support of the event, which includes the university’s concrete program producing eco-friendly race barriers for the August 2021 race. (MTSU photo by Andy Heidt)

Music City Grand Prix is working with MTSU to create safer and lighter blends of concrete using recycled materials and better molds long-term for racing barriers and pit row use in the upcoming IndyCar Series event. The partnership will also create hands-on learning experiences for students through internships and manufacturing relationships for the material science program.

Following the MOU signing, in a Concrete Industry Management laboratory in the Voorhies Engineering Technology Building, Byrnes, Crews and others watched as MTSU concrete professor Heather Brown guided students as they demonstrated concrete mold pouring, as part of required testing in the coming months. The eco-friendly concrete mix could potentially help reduce cost of putting on the event.

“By connecting our School of Concrete and Construction Management with the Music City Grand Prix, we bring the expertise of our faculty and the bright young minds of our students together with the deep knowledge and skills that prompted Grand Prix CEO Matt Crews and his top-notch team to create the infrastructure needed for a spectacular international festival, unlike any that Nashville has ever experienced,” Byrnes said.

The inaugural event will be held Aug. 6-8, featuring an open-wheel race in Nashville’s downtown corridor, food and music, and expected to attract more than 100,000 spectators.

Crews, an MTSU alumnus, record-setting kicker and Lawrenceburg native, said the racing event has been five years in the making and will now capitalize on the exposure from IndyCar’s 30 broadcast partners in 160 countries. He’s said he’s thrilled to see such an innovative academic program from his alma mater benefit from that exposure.

“I’m more excited about showing 160 countries what MTSU has accomplished on a daily basis,” Crews said. “I think it’s time for us to go racing Blue Raiders and look forward to carrying the MTSU mantle to the world.”

Brown, the former CIM and School of Concrete and Construction Management chair, helped align the partnership from the beginning, with Crews noting legendary racing owner Roger Penske, chairman and owner of NTT IndyCar Series, was greatly impressed by Brown’s presentation several weeks ago about MTSU’s work on race barricade technology and how that work could help the racing industry going forward. The MOU calls for MTSU to provide Music City Grand Prix with future guidance on barrier construction and suppliers and vendors.

“We are working to create environmentally conscious concrete mixes while not sacrificing durability and strength for the race barriers and pit lane,” said Brown, noting that the more eco-friendly mixes could reduce energy and landfill impacts.

“This partnership will create advanced learning experiences for students and expand our manufacturing relationships. Experiential learning is what MTSU works hard to bring to their students and it wouldn’t be possible without Music City Grand Prix’s commitment to local institutions as well as STEM education and the trades.”

MTSU Concrete Industry Management senior Chase Magerison, an Alaska native, was among several students assisting Monday with the mold pouring at the concrete lab. Scheduled to graduate in December, Magerison is appreciative of the unique opportunity the Music City Grand Prix is providing MTSU students.

“It’s an awesome opportunity for us as students to get some real hands-on experience in making more advanced mixes for a pre-cast company, which is not something we typically do” he said. “And the concrete program in general … (does) a great job of getting us out there for getting experiences and jobs.”

Joining Brown and Byrnes at the signing were Bud Fischer, dean of the College of Basic and Applied Sciences, which houses the concrete school, and Kelly Strong, first-year director of the School of Concrete and Construction Management.

The Music City Grand Prix has agreed to offer a minimum of two internships to qualified and approved MTSU undergraduate students per year, helping them gain experience in the areas of track design and construction project management and event operations, and provide MTSU with significant branding and promotion before and during each race weekend.

MTSU also agrees to assist the Music City Grand Prix in the review and selection appropriate and qualified area track suppliers and vendors for the necessary track alterations and construction; help them pursue applicable grants, subsidies and other corporate incentives relative to their concrete construction needs; promote the race and partnership to industry trade groups and facilitate a group ticket offering to the event for all MTSU alumni and families.