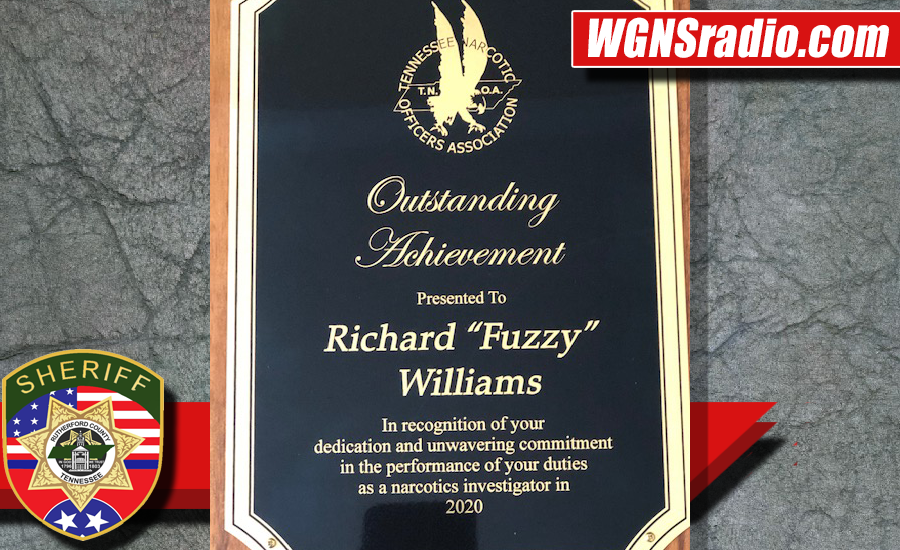 Detective R.L. “Fuzzy” Williams received the award in recognition of this “dedication and unwavering commitment in the performance of your duties as a narcotics investigator in 2020.”

Williams was part of multiple international and local investigations and participated in all aspects of the investigation while assigned to the U.S. Drug Enforcement Administration’s task force for 16 years. Also, he helped dismantle several local and international drug organizations.

He was humbled by the award.

“I spent my entire law enforcement career as a plainclothes detective, staying out of the public eye, and to be before several hundred people getting a standing ovation for years of dedicated service was very humbling,” Williams said. “I’ve been blessed.”

Williams credited his co-workers who investigate narcotics cases and the Sheriff’s Office employees.

Williams’ major concern now is with the use of the drugs Fentanyl and heroin “because they’re deadly. People have built a tolerance to the opiates so they have to take more or stronger doses to achieve the same high. The drugs are extremely physically addictive and psychologically addictive.”

When working at the La Vergne Police Department, Williams was assigned to the Rutherford County Drug Task Force in 1985 where he worked for two years. He began working as a Sheriff’s Office deputy in 1988 and earned a promotion as a narcotics detective in 1989.

Williams was assigned to work with the DEA in Nashville for a total of 16 years of his career. He earned the Department of Justice Award for Excellence in Law Enforcement from the U.S. Attorneys’ Office as a member of the DEA Drug Task Force in 2006 and 2011.

He thanked his wife, Laura Williams, a retired Smyrna Police detective captain, who is now a counselor, for her support for his career so far.

“I am so very fortunate to have a very loving and supportive wife who stood by me and kept me grounded,” Williams said.