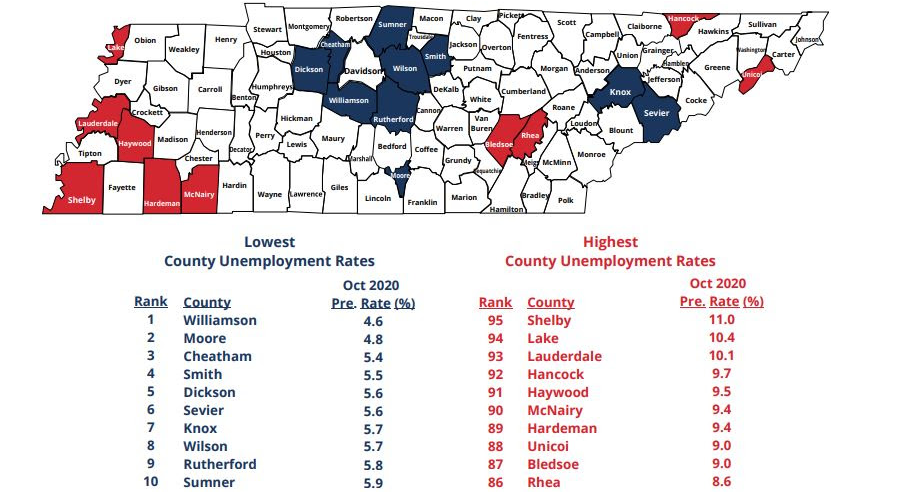 Many Tennessee counties experienced changes in their unemployment rates during October 2020, according to newly released data from the Tennessee Department of Labor and Workforce Development (TDLWD).

Unemployment in 93 of Tennessee’s 95 counties increased in October. Davidson and Sevier counties saw their rates decrease during the month.

During October, two counties in the state had unemployment rates below 5%, 90 counties had rates of 5% or greater, and three counties recorded rates of 10% or higher.

Williamson County had the state’s lowest unemployment in October with a rate of 4.6%, which is up 0.8 of a percentage point from its revised September rate of 3.8%

Shelby County recorded October’s highest jobless rate in Tennessee. At 11%, the county’s unemployment increased by 0.7 of a percentage point when compared to the previous month’s revised rate of 10.3%.

TDLWD has produced a report with a complete analysis of Tennessee’s October 2020 county unemployment data. You can find information for each county and statistical area here.

Nationally, unemployment decreased from September’s revised rate of 7.9% to 6.9% in October. The U.S. rate is 3.3 percentage points higher than it was in October 2019.

Jobs4TN.gov also offers online assistance with writing a resume that will catch the attention of employers, advice on how to engage and impress during job interviews, and details about potential job training opportunities.

There are more than 80 American Job Centers across Tennessee that are open for business and offering job seekers one-on-one personalized assistance. Career specialists are ready to work with individuals to devise a reemployment plan that will help them rejoin the state’s workforce.