INTERESTING STUDY: Tennessee Ranked as 8th Most Defiant State in the United States 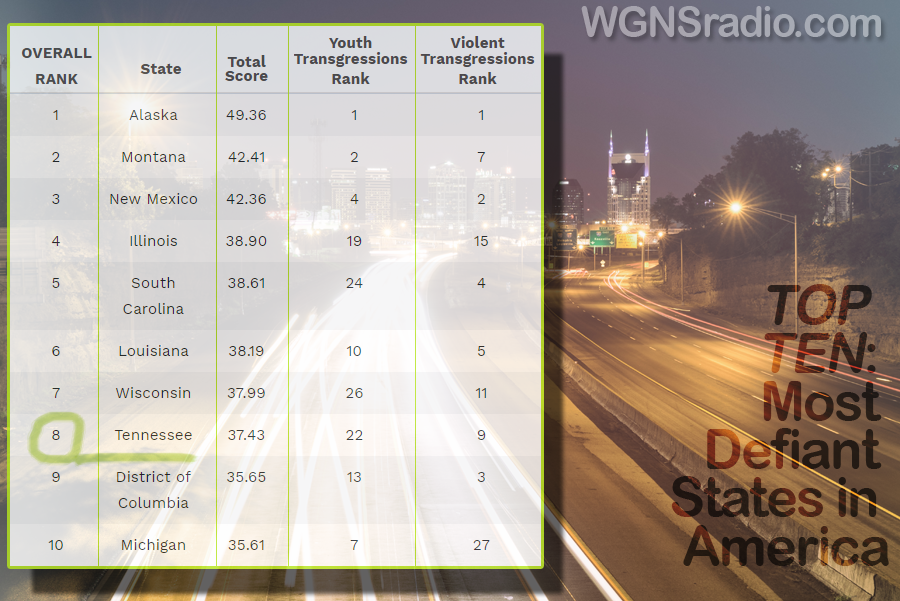 Photo by Scott Walker, list of states by Lawn Starter

We’ve all heard that “rules are meant to be broken,” but some of us take that observation too far.

In a year of excessive disobedience — people refusing to wear masks and even presidential candidates ignoring debate protocols, for example — it’s fair to wonder where Americans flout the rules more than others.

ADVERTISEMENT
As we look ahead to 2021 with an eye toward positive change, America’s leading outdoor services provider, LawnStarter, reflects back on 2020 with a list of the Most Rule-Defiant States.

To make the list, surveyors compared the 50 U.S. states and the District of Columbia across 31 key indicators of rule-breaking behavior, from underage drinking to illegal gambling to the prevalence of COVID-19.

The report showed that Tennessee - or Tennessee residents - rank at number 8 on the list for breaking the rules. In other words, Tennesseans are somewhat defiant.

Tennessee's Rank for Some of the Rule-Defiance Metrics (1 = Most Defiant):

The Last Frontier: Alaska sits at the top of our rankings, and for good reason. Often called America’s last wilderness, Alaska is a vast, rugged landscape that draws the independently minded. With high scores across the board — especially in youth transgressions such as chronic school absence and bullying — Alaska is the No. 1 state for going your own way.

Calm Blue Water: While the most defiant states are spread across the United States, almost all states at the bottom of our list are reliably blue. Places like Minnesota and New Jersey rank particularly low on violent transgressions such as hate crimes and unintentional shootings. School dropout rates and other youth transgressions are also at the bottom in these compliant states. There’s no definitive answer as to why this is the case, but it could have to do with a sharp economic divide between some red and blue states.

Sin City: Nevada is a special case when it comes to defiance. While sitting in the middle of our rankings on youth and violent transgressions, it’s in the non-violent categories where the Silver State really shines. Nevada has more prostitution arrests than any other state, more than twice that of the next state (Illinois). Nevada also ranks high on illegal gambling arrests and adult drug users. While not as high on our list as might be expected for the home of Sin City, defiant Nevadans appear to hold their own.

Unassuming Delaware: Sometimes the most rebellious are the ones you least suspect: Delaware ranks surprisingly high in a few key categories. Delaware is far and above the No. 1 state for fraud and embezzlement arrests, possibly due to its unofficial status as a corporate tax haven. Delaware also ranks as the No. 2 state for registered sex offenders. While it may be called “The First State,” Delaware should be one of the last places to choose if you’re a rule-abiding visitor.
Tags: America arrest break Chattanooga Defiance defiant disobedience Knoxville laws Memphis Murfreesboro Nashville rules Tennessee TN
Sections: News