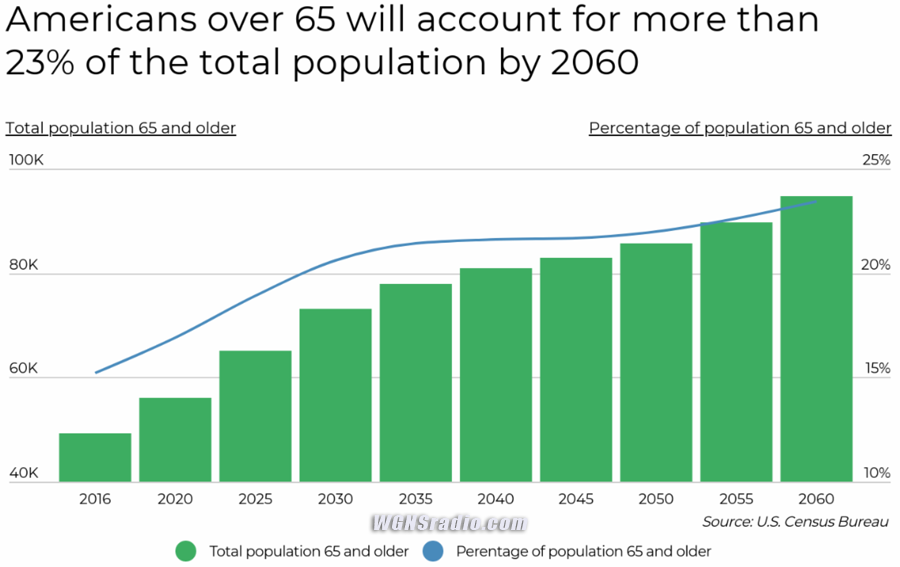 The year 2020 marked another decennial Census, the once-a-decade federal project of counting the U.S. population. The Census collects data on a variety of demographic indicators, giving the federal government and the public alike more information on how the population has changed and what that means for the future. One of the most impactful demographic trends across the United States in the coming decades will be the growth in the population aged 65 and older.

Meanwhile, Tennessee is not the only area graying as more Baby Boomers, who were until 2019 the U.S.’s largest generational cohort, reach retirement age.

The Boomers—more than 73 million Americans born between 1946 and 1964—began hitting retirement age more than a decade ago and will continue to age into the 65-and-up bracket until the end of the 2020s. Thanks to advances in healthcare and medicine, these older Americans are projected to live longer on average than their predecessors. According to the Census Bureau, by 2030, those aged 65 and older will constitute more than 20 percent of the U.S. population, and they are projected to remain between one-fifth and one-quarter of the U.S. population through at least 2060.

Another measure that puts this trend in context is the old-age dependency ratio, or the ratio of those aged 65 or older to the working age population (measured as those aged 15 to 64). In 2010, the national old-age dependency ratio was 20.8, meaning that there were 20.8 individuals over 65 for every 100 working age adults. By 2019, that figure had increased to 26.9. The Census Bureau projects that figure will be 41 by 2060.

A rising old-age dependency ratio means that those of working age increasingly carry the economic burden of care for the nonworking elderly. The U.S. is already seeing signs of these effects. A wave of retirements will leave labor shortages in some industries, while many of the occupations with the greatest growth potential are in health and social services, driven by the elderly’s greater need for care. Experts believe that GDP growth is likely to slow as a result of lost productivity and increasing costs of care. Government social insurance programs like Medicare and Social Security have seen their expenditures balloon as more retirees shift from paying into the system to receiving benefits from it. Nationally, within states, and at the community level, the U.S. will continue to experience the socioeconomic implications of an increasingly older population.

Contrary to what one might expect, it won’t just be retirement destinations like Florida—the state with the highest share of seniors currently—who will feel the effects of an aging population. The population over 65 is growing across the country, and other states leading the list of senior populations are as geographically and culturally varied as Maine, West Virginia, Hawaii, Pennsylvania, and South Carolina. The same conditions are true of cities, and they will likewise experience the impacts of an aging population.

To find the states where these trends will be most apparent, researchers at Filterbuy used 2019 U.S. Census data to identify which locations have the largest share of residents over 65. The researchers also found the state-level old-age dependency ratios as well as the percentage of the senior population with a disability to understand where the burdens of care may be even higher.

The analysis found that in Tennessee, 16.5% of the population is 65 years old or older. Researchers calculated an old-age dependency ratio of 27.3%, which means that there are 27.3 residents aged 65 and older for every 100 working-age residents (16-64 years old).