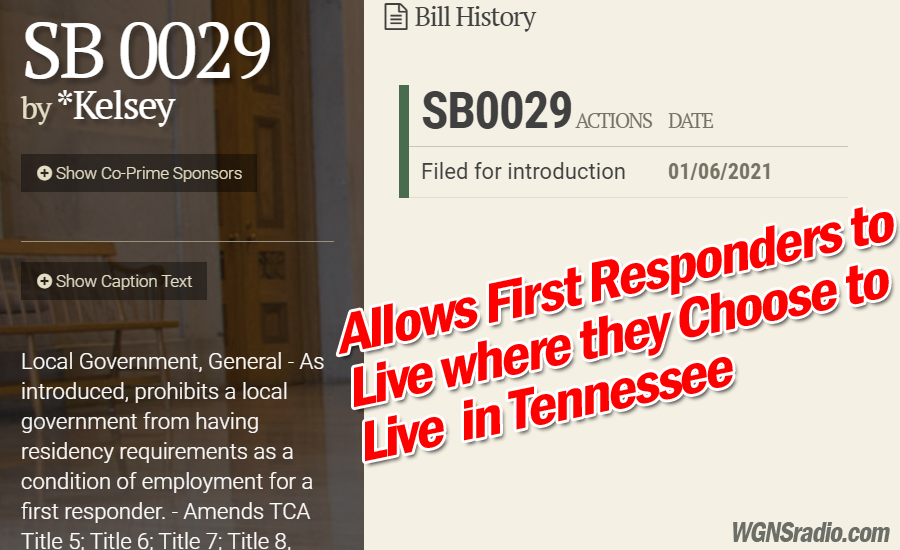 State Senator Brian Kelsey (R-Germantown) today filed SB 29 which would allow first responders to live where they choose. The bill would ban residency requirements statewide for police officers and firefighters. Kelsey says the bill is a matter of public safety and will allow police and fire departments to recruit top tier first responder candidates, regardless of where they live. The lawmaker says, in particular, it will help Tennessee address a deficit of police officers occurring throughout the country.

“This is a public safety bill. It will enable us to hire more police officers, which will help us fight our rising crime rates," said Kelsey. "This bill will support our police and fire officers who keep us safe by allowing them to live where they choose."

ADVERTISEMENT
“This bill addresses the needs of our local law enforcement and emergency services agencies, ensuring they have one of the most valuable resources –sufficient personnel– to protect our citizens and keep our communities safe,” said Representative Jerome Moon (R-Maryville) who is sponsoring the bill in the House of Representatives. “Removing residency requirements will greatly expand the pool of highly-qualified applicants.”

In Memphis, major violent crime rates are up nine percent, and the city suffered from a record of over 300 homicides in 2020. In addition, a recent analysis by Drs. Richard Janikowski and Phyllis Betts of Strategic City Solutions revealed that the Memphis Police Department is understaffed by several hundred officers and that as the number of officers in the police force increases, the levels of violent crime in Memphis decrease. In December, the City Council adopted a resolution acknowledging that the city is over 400 officers short of its hiring goal.

The new bill would seek to remedy the lack of law enforcement officers by applying the practices adopted by many local police departments statewide. The Municipal Technical Advisory Service (MTA), which provides assistance and training to municipal officials and employees as part of the University of Tennessee Institute for Public Service, says that most cities in Tennessee have moved away from residency requirements due to difficulties in recruiting.

The measure has received broad support from legislators and community leaders throughout Shelby County.

“I strongly lend my support to this common-sense legislation,” said Senator Paul Rose (R-Covington). “Law enforcement officers, firefighters, and emergency personnel across our state are on the front lines protecting us every day. They need the support of all citizens and legislators, and I believe when this legislation is passed, the leadership of these departments will be enabled to hire the staff they desperately need.

“Reducing violent crime, public safety and safe streets are the number one priority of the residents of Memphis,” said Representative Mark White (R-Memphis). “This legislation enables Memphis to have a fully staffed law enforcement agency to give us those safer streets.”

“Now more than ever, Memphis is in need of police officers to protect our community,” said Representative Tom Leatherwood (R-Arlington). This piece of legislation will give more qualified men and women the opportunity to serve their neighbors and keep Memphis safe.”

“I think it is a mistake to limit ourselves when it comes to recruiting good men and women to serve and protect our communities,” said Representative John Gillespie (R- Memphis). “We should be thinking regionally.  This legislation will help to expand our pool of highly-qualified applicants, resulting in more boots on the ground serving constituents.”

"Like many police departments, we continue to struggle with staffing,” said Memphis Police Director Michael Rallings. “Although we work hard to hire within Shelby County, it is unrealistic to believe that we will be able to increase our number of officers if we do not broaden our scope of candidates. Dropping the residency requirement would allow us to hire more individuals who want to serve our great city."

“Eliminating residency requirements provides public safety agencies with an opportunity to consider a broader selection of candidates who have a desire to serve the citizens of Memphis and Shelby County,” said Shelby County Sheriff Floyd Bonner. “This public safety-focused measure supports the interest of law enforcement and fire services leaders from across the state in providing safe communities for all Tennesseans.”

“This law will help us keep our citizens safe by allowing us to hire an untapped group of the best and brightest candidates from across the entire region,” said Thomas Malone, President of the Memphis Fire Fighters Association. “Potential fire fighters won’t need to weigh their desire to protect the public against forcing their family to uproot and move due to an antiquated residency requirement.”

“When it comes to protecting the safety and well-being of the public, no stone can be left unturned. Citizens want and deserve the best services possible,” said Essica Cage, President of the Memphis Police Association. “This law is an essential step in leveling the playing field and allowing us to be more competitive in recruiting, hiring and retaining police officers from a larger geographic area. Simply put, the lifting of residency requirements will translate into more boots on the ground to help curb rising violent crime rates and keep citizens safer.”