Deputy Recovers $17,000 Worth of Drugs During Traffic Stop for Speeding - Earns State Reward 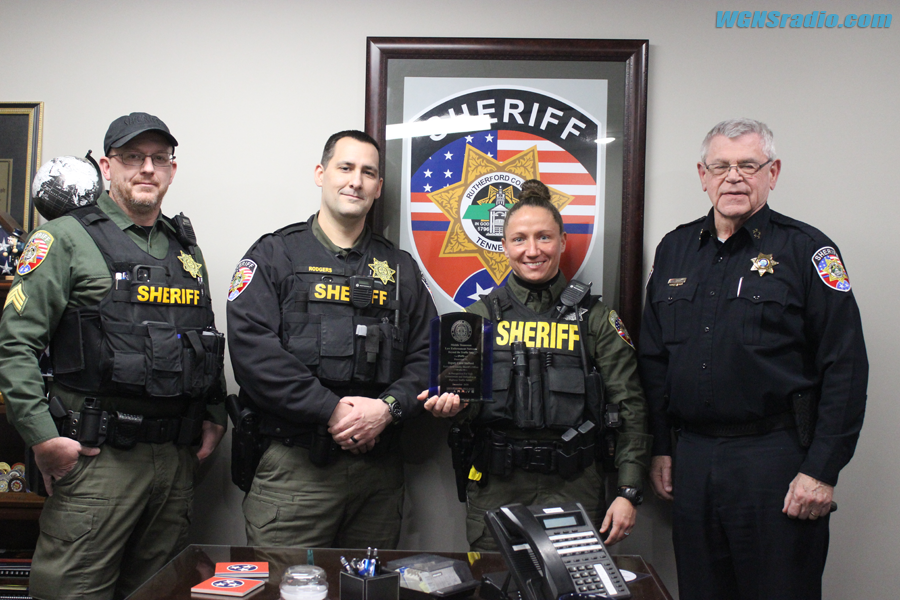 Deputy Carol Stafford received the Tennessee Highway Safety Office Beyond the Traffic Stop award. Flanking her at left are Sgt. Nick Coble and Sgt. Michael Rodgers, who serves as THSO network coordinator, and at right is Sheriff Mike Fitzhugh.

Recovering about $17,000 worth of illegal drugs during a traffic stop for speeding earned a Rutherford County Sheriff’s deputy a state award.

Deputy Carol Stafford earned the Beyond the Traffic Stop Award this week from the Tennessee Highway Safety Office.

Sgt. Nick Coble, who nominated Stafford, said she helped recovered Ecstasy tablets and pills believed to be Fentanyl after stopping the driver July 28 on Interstate 24 near the Buchanan Road exit.

Stafford approached the driver and noticed several air fresheners in the vehicle and carpet displaced under the legs of the back seat passenger pretending to be asleep.

Indications of illegal drugs being in the vehicle prompted Stafford to request a Sheriff’s K9 and handler to check the car, the sergeant said. The K9 indicated the presence of drugs in the vehicle.