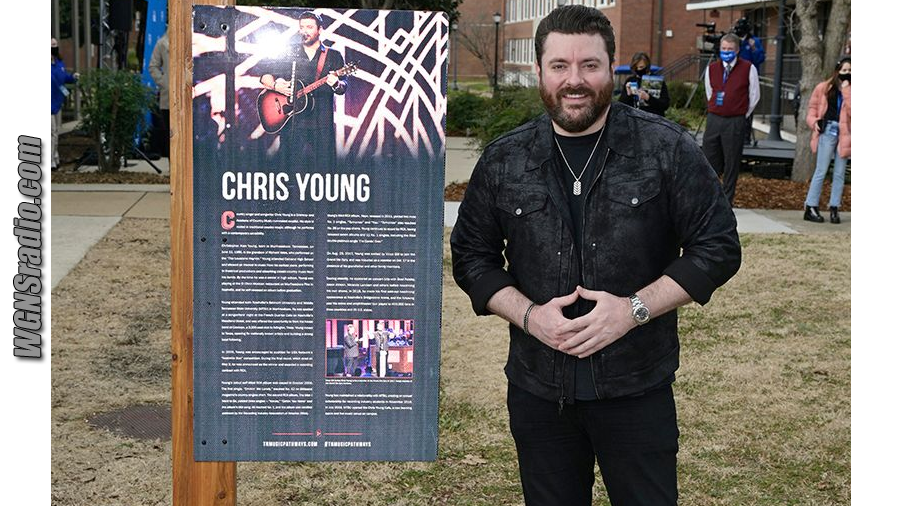 ADVERTISEMENT
Young, an RCA Nashville country artist and member of the Grand Ole Opry, helped cut the blue ribbon Jan. 27 in a socially distanced event to formally reveal the renovated facility on the campus where he spent time as an undergraduate student.

“So many things have happened in my career that I never expected, and really and truly, this Tennessee Music Pathways Marker is one of those things,” said Young, a Billboard Top 20 Country Artist of the Decade who attended MTSU in 2005.

“I remember standing on this campus trying to write music, meeting other people that I’ve continued to work alongside in music, and I am absolutely blown away. It’s an incredible honor.”

“This is my hometown, and this (cafe) means the world to me," Young continued. “Whether they are musicians, comedians, entertainers, people who want to learn how to engineer and produce, videographers, photographers, anything, I hope everyone finds a use for this space. I really hope everyone enjoys it. It’s just been an honor to be a small part of this.”

The hourlong event, which followed university health safety protocols with a limited in-person crowd, aired live on MTSU’s True Blue TV channel and was livestreamed on YouTube and Facebook.

"Much like Chris himself, and the power of his music, this cafe will serve as a catalyst for bringing people together and building community," said MTSU President Sidney A. McPhee said.

"The Chris Young Cafe will encourage our students to dream bigger. Every time they see his name on the cafe, their aspirations will seem a little more obtainable, if they follow in his footsteps and work as hard as he has."

The Tennessee Department of Tourist Development detailed Young’s accomplishments in the new Tennessee Music Pathways marker unveiled outside the cafe.

The marker for the statewide initiative, which identifies, interprets, promotes and preserves Tennessee’s musical heritage, is the second on the MTSU campus; the Center for Popular Music at MTSU, located inside the Bragg Media and Entertainment Building, received its Pathways marker in November 2018.

“Chris Young’s accomplishments in music are significant, and many don’t know his career began right here in his hometown of Murfreesboro at MTSU,” said tourism Commissioner Mark Ezell.

“It’s an honor to recognize his achievements, along with MTSU’s contributions to the state’s rich music heritage, as part of the Tennessee Music Pathways.”

From dining hall to performance hall

Visitors will find two club-type seating areas for listeners and a VIP-type zone, near the audio and lighting control boards, that features artwork, framed gold and platinum records and other memorabilia.

Inside the facility, students will learn skills from nearly every facet of the business of entertainment: music business, audio production, songwriting, venue management, sound reinforcement, and lighting and rigging, along with radio broadcasts, comedy shows and other events produced with help from all of MTSU’s academic colleges.

The cafe, originally named for distinguished 1929 Middle Tennessee State Teachers College alumnus Thomas B. Woodmore, first opened in 1963 as a cafeteria serving the east side of MTSU’s campus.

MTSU renovated and reopened the facility in spring 1999 as the "Cyber Cafe," touting it as "futuristic" with a small bank of student-accessible computers with Internet access and extended late-night dining hours.

In July 2019, the university announced that Young had donated $50,000 to update the Woodmore Building as a teaching and rehearsal space for College of Media and Entertainment students and as a performance venue to put those students’ training to use.

Students and faculty in MTSU’s Department of Recording Industry had been using the facility as a live-event classroom to prepare and stage daytime and evening live shows since the college began presenting events there in fall 2018.

A faculty showcase that semester drew McPhee to the Cyber Cafe, where he wound up on stage playing a theremin. He subsequently approved renovations for the 2019-20 budget year.

Baird last used it in September for the department’s Match Records student-run label signees, Shelter Cove, to rehearse for their worldwide appearance on “Rock the Vote at Belmont University: Nashville Colleges Celebrate Democracy.”

“When I first started working over there in the fall of 2018, it was so far underground …,” he recalled with a laugh. “I'd go in and I'd move all the couches and the furniture, and those counters (for working and eating) were everywhere, and I'd set up between the two risers, exactly where the stage is now.

“I’d literally just set a couple of speakers on the floor — speakers on sticks — and then when we were done, we had to put all the furniture back and push all the equipment back over to (the) Bragg (Building).”

Renovations began in earnest at the cafe last summer as crews reconfigured the space from a quick dining and gathering spot with two raised platform stages to its current performance-venue feel.

“The cafe is a classroom for the live event production industry, which gives us a unique status. It's very much like our recording studios and very much like Tucker Theatre,” said Baird, who’s teaching three sections of his “Sound Reinforcement” course there his spring, plus an advanced class that delves deep into live event setup, performance and load-out.

“We're trying to find a balance between using it during the day for classes and then have these labs in the evenings where we want to bring in bands and give the students more opportunities.”

Young has maintained his True Blue ties to the Murfreesboro campus since his student days, donating a selection of his touring audio equipment in 2012 and funding an annual scholarship for recording industry students in 2016.

His accomplishments include nearly 4 billion on-demand streams, 13 million singles sold and 11 career No. 1 singles. He has two Grammy nominations as well as award nominations from the Country Music Association and Academy of Country Music.

To cap off the year, Young took home a CMT Music Awards trophy in October for his performance of “Drowning” at the CMT Artists of the Year special four months earlier, and Billboard named him as a Top 20 country artist of the decade.

Beverly Keel, dean of the College of Media and Entertainment, said the college is “thrilled that the cafe bears the name of Chris Young, because Chris epitomizes what we hope to instill in our students. Not only is he successful professionally but he is also an exceptional man of character, integrity and generosity.”

“This cafe is a game-changer for the college because it provides real-world, hands-on experience. It's a wonderful place where they can shine and even make mistakes before they get out to the bigger stage,” added Keel, a former chair of the recording industry department, which is now led by music veteran John Merchant.

"We're so glad to finally be able to share this space with the world, this world-class performing space that supports all of our students: our audio production, our music business and our songwriting students," said Merchant.

"This will be a space that takes care of generations of students who will aspire to do great things, just like Chris has done."

During the hourlong event, Young was the first to perform on the cafe’s new stage, presenting an acoustic rendition of “Famous Friends” and noting it was the first time he’d played the tune live for an audience.

Sophomore commercial songwriting majors Chase Cimala of Somerset, Kentucky, and Jaelee Roberts of Murfreesboro then paid tribute to Young by performing his songs “Who I Am With You” and “Tomorrow.”

The Charlie Daniels Journey Home Project also honored Young during the cafe event by announcing a $10,000 donation for the newly named Daniels/Young Veterans Scholarship, honoring both the late music legend and his younger colleague.

The scholarship will benefit student veterans in the Department of Recording Industry. David Corlew, co-founder of The Charlie Daniels Journey Home Project and Daniels’ longtime manager, presented the check during the celebration.

“We’re honored to continue our ongoing relationship with MTSU and the Charlie and Hazel Daniels Veterans and Military Family Center," Corlew said. "We have now broadened our reach into the College of Media and Entertainment with this opportunity to work with Dean Beverly Keel and Chris Young on yet another mission to support our vets.”

McPhee gave Young a framed photo of the cafe’s mural, designed by Leslie Haines, a professor of visual communication in the college’s School of Journalism and Strategic Media, and Jonathan Coulter Trundle, a professor of photography in the Department of Media Arts.

Along with Young, his mother, McPhee and MTSU alumna Keel, the mural on the cafe’s north exterior wall includes fellow MTSU-trained musicians and media members, educators and leaders throughout the community. The complete list is available at http://mtsunews.com/chris- young-cafe-opening.

University Provost Mark Byrnes praised that real-world preparation during the Jan. 27 celebration, calling the cafe “one of the most creative and innovative learning laboratories on our campus.”

"Innovations like the Chris Young Cafe, when combined with our terrific faculty, are why our university is recognized year after year by Billboard magazine as one of the world’s best music business schools,” Byrnes said, “and 'NBC Nightly News' described MTSU as a 'Grammy-winning factory' for good reason."

MTSU alumni, former or current students, and faculty from across the university have been a part of nearly 100 Grammy Award nominations in the last decade. So far 11 have won a total of 32 Grammys, including seven repeat recipients, in categories from classical to pop to country to gospel since 2001. 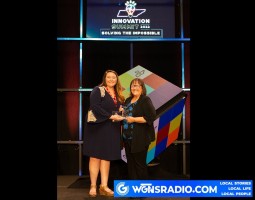