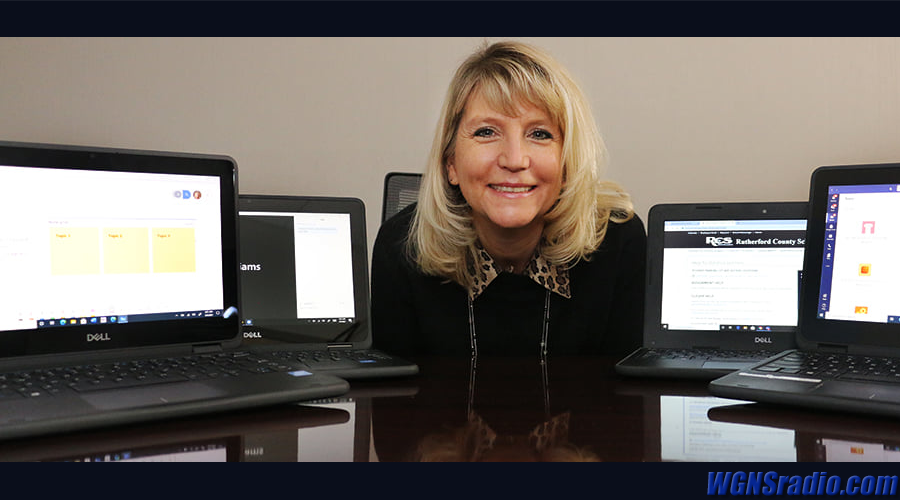 Dr. Jimmy Sullivan, the assistant superintendent for curriculum and instruction, gathered his staff of coordinators for Rutherford County Schools in a conference room at the Central Office and then the Director of Schools, Bill Spurlock, opened the gathering with a surprise announcement.

ADVERTISEMENT
Spurlock started by saying everyone in the room was deserving, but that he wanted Jeannie Williams to know he had selected her as this year’s RCS Supervisor of the Year.

“I’m very humbled by that and I was just absolutely shocked,” said Williams, who is admittedly not an emotional person. “I don’t feel like I’m any more deserving than anyone else, truly. We just want to make things work for teachers and students. I really don’t deserve the credit because I have a great team—Cherri (McCrary) and Jennifer (Brooks) and Kim (Cing) and then, of course, all the coordinators have been so helpful, and I’ve learned so much this year from each of them.”

Williams added, “I just said thank you and then we got back to business as usual.”

Williams is in her first school year as the Instructional Technology Coordinator.

“What she had to do to make sure she could get an entire district going, was impressive,” said Sullivan, who noted the position was not only a problem-solving role but Williams knowingly took on the challenge of facing problems no one had ever faced in the history of education.

Her name and application will now be submitted to the Tennessee Department of Education for consideration for the same honor at the state level.

Jeannie Williams was born and raised in Rutherford County.

Her father, Winston Brothers, was a dairy farmer until selling the business and transitioning to beef cattle. Her mother, Bonnie Brothers, was an engineer for the Tennessee Department of Transportation.
Williams graduated from Riverdale High School in May 1991 — the same year her father sold the dairy business — and went off to culinary school in Louisville, Kentucky.

“I just always enjoyed cooking and back then you didn’t have the Food Network or even the Internet,” Williams said. “I’m showing my age, right? We couldn’t Google anything in those days. I went to culinary school and when I moved back, I went down and worked on the Disney college program, but it was just an associate’s degree. My mom said, ‘You really need to get your B.S.,’ so I went to MTSU and I fell in love with the education courses.

“I never dreamed in a million years that I’d be a teacher.”

Her first job was at Cason Lane Academy.

She oversaw the grant for the school’s seventh- and eighth-grade career and technical education program, and along with managing budget, she worked as the site director for the afterschool program. She then taught technology education and helped with the guidance program for third through eighth grade.

That’s where she developed a love of instruction, education and technology.

Williams went back to school and earned endorsements for technology education.

She had always wanted to start a catering business and might do that on the side one day, but Williams said, “God’s in control and he puts you on the path he wants you to be in.”

Siegel was a brand-new school and the technology lab, which was part of the STEM program, was the first lab in the county.

The following year she was hired to fill a position as a school-based technology specialist at Riverdale High School — “I’ve learned so much with each experience” — where she spent the next 11 years before moving to the Central Office.

Things could have been different.

When Blackman High was opened in 2000, Williams applied for the position as a culinary arts instructor.

“I was hoping to get the position,” Williams said, “but I interviewed, and I did not get that. I’m thankful I didn’t because it led me down a completely different path.”

The role is difficult for anyone during a normal school year, but the technology needs caused by the ongoing COVID-19 pandemic made it even more challenging.

Williams took the position July 1 in the midst of the pandemic at a time the instructional department was busy developing reopening plans for teachers and students.

Sullivan added, “She has truly stood out in not just her leadership, but her problem solving in her very first year in that position with an extremely small team.”

All eyes were on instruction, especially as it related to the implementation of technology.

Williams is said to have never wavered under the unprecedented pressure that came with the challenges born from the ongoing pandemic.

The key to success was remaining flexible, Williams said, explaining that technology constantly changes and shifts, regardless of whether students are distance-learning or learning in-person.

“I like what we’re doing,” Williams concluded. “We want to leverage the good practices that came out of this and that’s the conversations that we’re having … to see how we can serve better … and making sure we’re still meeting the student needs next year.