MURFREESBORO: Shoplifting Incident being Investigated - Allegedly Shoplifting Over $3,100 at Lowe's 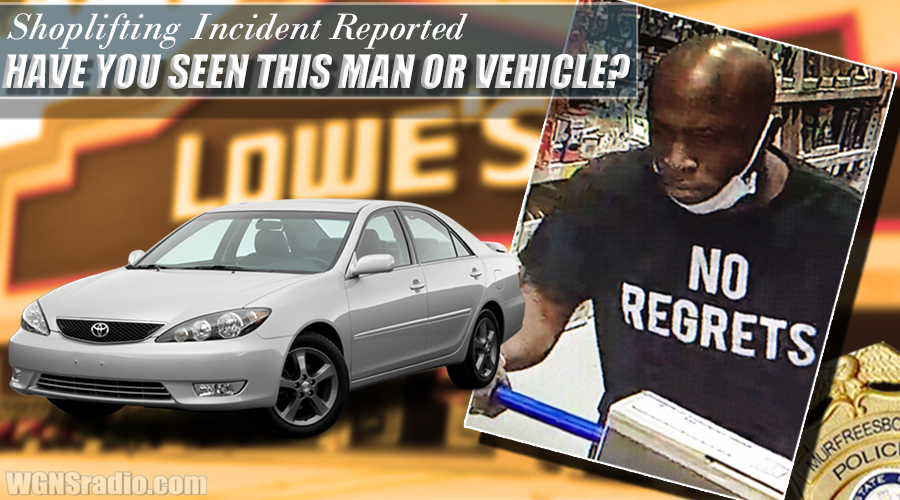 ABOVE LEFT: Car similar to one reported to have been used in Murfreesboro shoplifting incident. ABOVE RIGHT: Police report they are trying to determine this mans identity.

Murfreesboro Police need assistance from the community to determine the identity of an accused shoplifter. The shoplifting incident adds up to more than $3,100.

Detectives report the man in the photo, along with a second subject that can not be seen in surveillance photos, allegedly stole merchandise from Lowe's on at least two different occasions.

In one incident on Feb. 16, 2021, the men took $1,789.70 worth of merchandise, according to police. Some of the items taken from the Lowe's on Old Fort Parkway included wiring and nails. In the second theft, they took more wiring along with miscellaneous electrical materials worth $1,334.84 without paying for it. The duo left the business in a silver 2004 Toyota Camry.

Authorities say that the second subject that can't be seen in the above photo, has already been identified. If you know who the man is in the picture released by authorities, please contact MPD Detective Ed Gorham at 629-201-5507 or by email at 0300@murfreesborotn.gov.