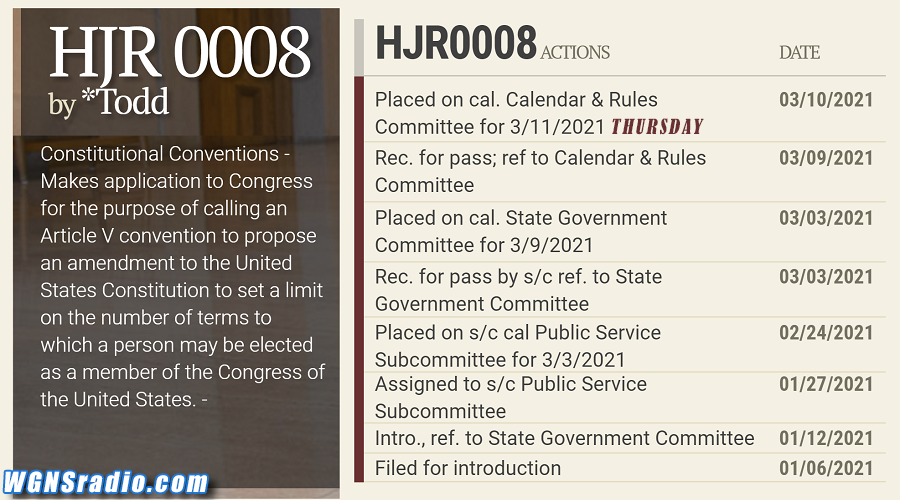 Earlier this week on Tuesday, the Tennessee House State Government committee passed House Joint Resolution 8 for Tennessee to join other states in calling for a convention to propose a congressional term limits amendment to the U.S. Constitution. The effort is being spearheaded by the nonpartisan, grassroots nonprofit, U.S. Term Limits.

Sponsor Rep. Chris Todd said, "Now, more than ever we see the need for limiting the terms of the US Congress. You would be hard-pressed to adequately defend the loss of new ideas and vision we all observe and the potential corruption that comes with being a career politician in Congress."

According to a recent RMG Research poll, 78% of likely voters in Tennessee support term limits on Congress, including strong support among Republicans, Democrats, and independents alike.

"Constitutional Conventions - Makes application to Congress for the purpose of calling an Article V convention to propose an amendment to the United States Constitution to set a limit on the number of terms to which a person may be elected as a member of the Congress of the United States."

HJR8 has a groundswell of bipartisan support from state lawmakers. Dozens of members of the legislature have gone so far as to sign a pledge to co-sponsor Todd's legislation.

U.S. Term Limits President Philip Blumel commended Rep. Todd for putting forth the legislation. Blumel said, “The people of Tennessee are lucky to have public servants who see what is going on in D.C. and are willing to take action to fix it. They know that Congress won't set term limits on itself. Therefore, it is the obligation of the states to do so.”

HJR8 will now make its way to House Rules before hitting the floor for a vote by the Tennessee House of Representatives.

If passed in both the state house and senate this session, Tennessee will join other states in the call to convene the states for the exclusive purpose of proposing term limits on the U.S. Congress. Once 34 state legislatures pass similar resolutions on the topic and approve the term limits amendment, it must be ratified by 38 states to become part of the U.S. Constitution.