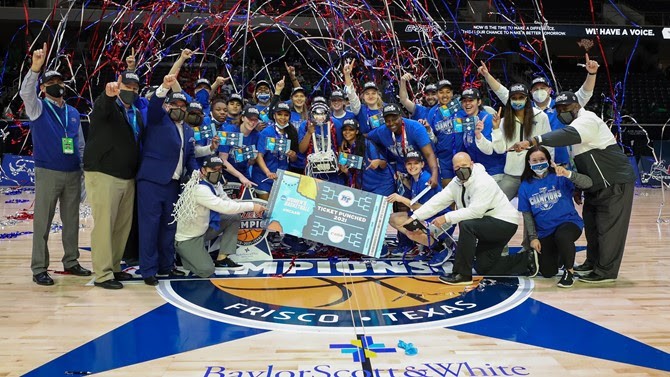 In a rather abnormal year, the Middle Tennessee Lady Raiders returned to a sense of normalcy here Saturday night.

Middle Tennessee (17-7) captured the Conference USA Championship with a riveting 68-65 win against defending champion Rice at the Ford Center at The Star. It marks the Lady Raiders' third C-USA championship in four title game appearances and their first since 2016.

The Lady Raiders will learn their first-round opponent during the NCAA Women's Basketball Selection Show on ESPN Monday at 5 p.m.

"We are back where we belong," Insell said. "It's been a long, tough season with so many twists and turns. With the COVID-19 protocols and all it has been a roller coaster ride. These young ladies have been through a lot to get to this point, and they are certainly deserving of this title.

"We definitely had to earn it against an outstanding and well-coached Rice team. It was a great championship game."

It was an epic battle that pitted two of C-USA's heavyweights with Rice (18-4) winning the West Division regular season title and Middle Tennessee winning the East Division title.

Tournament MVP Anastasia Hayes scored 10 of her 17 points in the pivotal fourth quarter to curtail Rice's comeback attempt. Hayes stuffed the stat sheet adding seven assists, six rebounds and two steals to her 17-point effort. The C-USA Player of the Year averaged 24.7 points, 6.3 assists and 2.0 steals in the three wins, while also shooting 60 percent (31-of-52).

"We worked so hard for this, and we weren't going to be denied," Hayes said. "We had to gut it up and it wasn't easy, but we found a way to win. This tournament showed what a true team we have. Different people stepped up for us throughout."

Courtney Whitson poured in a career-high 22 points and tied the C-USA Championship game record with six 3-pointers in 12 attempts. Whitson added five rebounds. Her sizzling shooting from beyond the arc helped get Middle Tennessee off to a strong start as they led 32-26 at intermission. Whitson earned All-Tournament honors.

Aislynn Hayes rounded out the double figure scoring for Middle Tennessee with 15 points and pulled seven rebounds and added three assists. Deja Cage led the Lady Raiders with nine rebounds and connected for one of the biggest 3-pointers of the game at the end of the shot clock late in the fourth quarter.

In a game with more twists and turns than a cheap garden hose, Middle Tennessee built its largest lead of the game when it went on top by 10, 63-53, on a Whitson layup with 4:31 remaining. Rice; however, stormed back to give the Lady Raiders a fight to the finish. The Owls' largest lead was two, 51-49, with 8:00 remaining.

"You just knew it was going to come down to the wire with two teams as good as these," Insell said. "They made big plays down the stretch and so did we. It was a great championship game."

Cage followed with her biggest 3-pointer of the tournament, connecting from the wing as the shot clock expired to push the lead to 66-60 with 1:12 remaining.

Rice would not fold. Lauren Schwartz followed with a 3-pointer on the other end and Jasmine Smith followed a Lady Raider miss with a driving layup at the 13-second mark to get Rice to within one, 66-65.

Rice called a timeout to advance the ball and came out of the timeout looking for Mulkey on the block. Boothe deflected the pass into the hands of Alexis Whittington, who was fouled and hit one of two free throws for the winning margin.