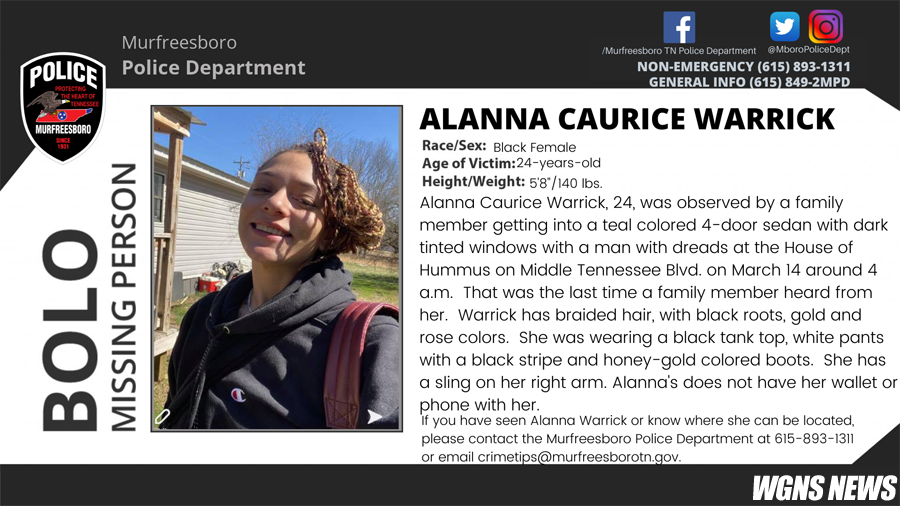 Police in Murfreesboro say that the family of a 24-year-old woman are concerned about her recent disappearance.

Alanna Caurice Warrick was observed by a family member getting into a teal colored 4-door sedan with dark tinted windows this past Sunday, March 14th.  Evidently, that was the last time she was seen or heard from.

ADVERTISEMENT
The missing woman got into the vehicle outside the House of Hummus on Middle Tennessee Boulevard at 4 in the morning on the 14th. The person who witnessed Warrick getting into the sedan, had only a few details to give police because the windows on the car were so dark. One detail being the driver appeared to have his hair braided into dreadlocks.

Warrick has braided hair with black roots and gold with rose highlights. She was last seen wearing a black tank top, white pants with a black stripe and honey-gold colored boots. She has a sling on her right arm.

Reports indicate that Warrick does not have her wallet or phone with her.

The missing woman has been entered into the National Crime and Information Center database as a missing person.  If you have seen Alanna Warrick or know where she can be located, please contact the Murfreesboro Police Department at 615-893-1311 or email crimetips@murfreesborotn.gov.
Tags: Alanna Warrick Blvd House of Hummus Middle Tennessee missing Murfreesboro police Tennessee TN woman
Sections: News