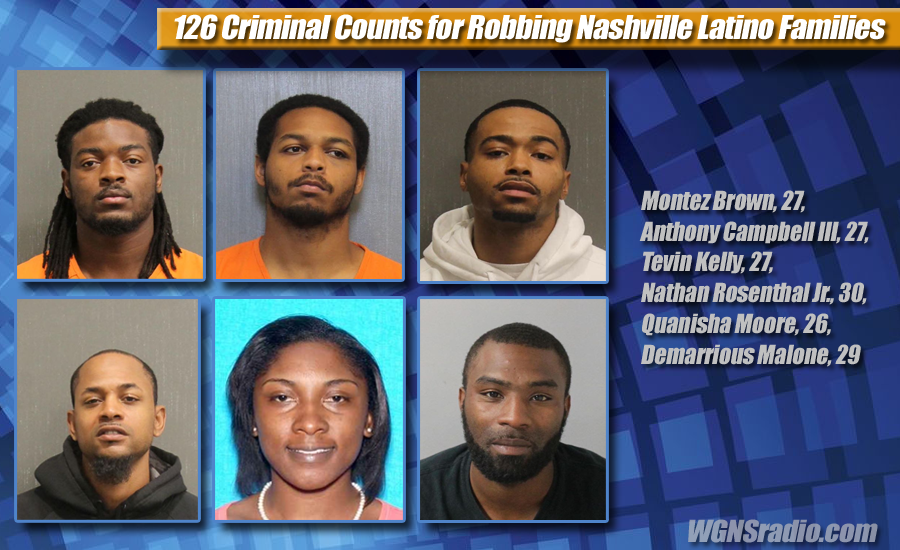 A six-person robbery crew linked to 150 holdups of primarily Latino families throughout Nashville between 2017 and 2019 has been indicted by the Davidson County Grand Jury on 126 criminal counts.

The indictments stem from 29 violent robberies in which victims were frequently subjected to beatings, even while cooperating. The armed suspects would often make entry into apartment homes through unlocked sliding glass doors. These 29 cases were selected for prosecution in conjunction with the District Attorney’s Office due to the strength of evidence and committed assistance from victims.

ADVERTISEMENT
It is estimated that this crew is responsible for robbing the victims of $150,000 in cash and personal belongings, such as cell phones.

- Tevin Kelly, 27, of Nashville, who was taken into custody on the indictment Thursday and who possessed a loaded semi-automatic pistol at the time of his apprehension. Kelly has been indicted on 1 count of aggravated robbery, with additional charges against him anticipated.

- Nathan Rosenthal Jr., 30, of Nashville, who was taken into custody Thursday. Rosenthal has been indicted on 4 counts of aggravated robbery, 1 count of aggravated burglary, and 2 weapon counts.

- Quanisha Moore, 26, of Clarksville, who remains at large. She has been indicted on 10 counts of aggravated robbery.

- Demarrious Malone, 29, of Memphis, who also remains at large. He has been indicted on 3 counts of aggravated robbery.

The investigation shows that at least some of the defendants used proceeds from the robberies to enhance their lifestyles with travel to the Dominican Republic, Miami, and Texas, and with purchases of jewelry, shoes and guns.