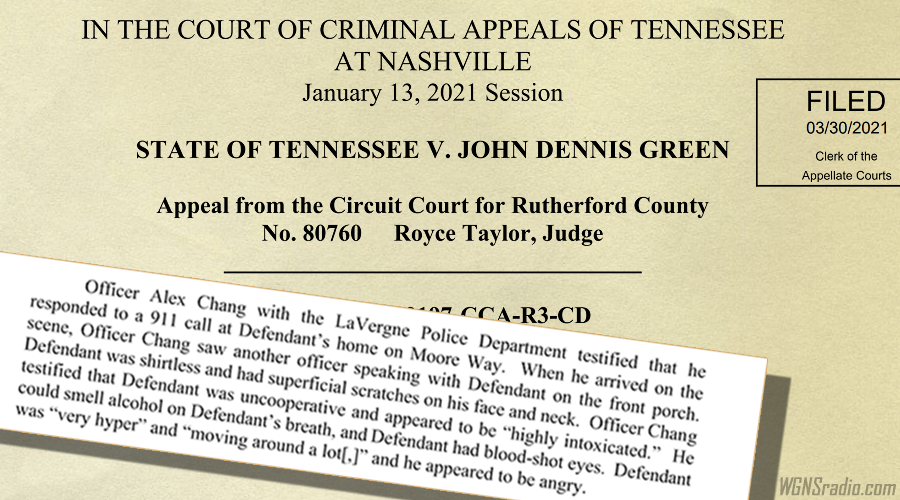 The Court of Criminal Appeals just sided with a judgment set by the Trial Courts in Rutherford County, after a defendant filed an appeal in an aggravated and domestic assault case.

When John Dennis Green and the victim started dating in 2013, he allegedly told her that he worked at a sports / talk radio station, according to court documents. The victim, who worked with special needs children at a learning center, testified that she later found out Green never worked at the sports / talk radio station and he was simply someone who called the station to talk about sports. Court records show that the girlfriend later found out that Green worked as a cook and dishwasher at a fast-food restaurant.

As the relationship continued, the victim moved into Green's LaVergne home in 2014.

On the night of the assault in 2018, the victim said that Green had been texting his boss and that a disagreement ensued when he reportedly took “some Percocet with the alcohol he was consuming.”

The victim yelled at Green for dropping a plate of food and told him that she was leaving. Green then told the female that she was not going anywhere and turned over the kitchen table, according to court documents.

The victim testified, “the disagreement escalated quickly after she told Defendant that she was leaving and that Defendant “destroyed” the house.” She said “out of nowhere,” Green began hitting her. The woman said he pulled her hair and pushed her into a chair where he held her down and placed his hand on her throat “crushing” her airway.

Testimony showed that the victim claimed she tried to push Green away and he bit her thumb, arm and face. Their dog intervened and bit Green's leg.

The woman says she ran outside when their dog bit Green and yelled for a neighbor to call 9-1-1. When Green went outside to follow the victim, the next door neighbor went back inside as Green started hitting the victim, according to testimony given during the court proceeding.

The victim said that Green had her phone and that he dropped it during the assault on the front lawn. She was able to grab her phone and run back inside, locking the front door behind her and dialing 9-1-1.

In court, Officer Alex Chang with the LaVergne Police Department testified that he responded to the 911 call at Green’s home and Green was uncooperative and appeared to be “highly intoxicated.”

Going back to the start of their relationship and Green talking about being on the air, Officer Chang recalled on the night of the arrest that Green told him he was once a radio DJ who went by the name "Doctor Detroit."

Following deliberations, the jury found Green guilty of aggravated assault and domestic assault. The trial court sentenced Green to three-year's behind bars, which was suspended and he was ordered to be under supervised probation, following thirty days in jail.

In an appeal, Green contends that the trial court erred by failing to instruct the jury on self-defense and that the evidence was insufficient to support his convictions. Upon review, the appeals court sided with the judgments of the trial court.

The case will not be re-heard, according to information filed by the court clerk of the Appeals Court on March 30, 2021.