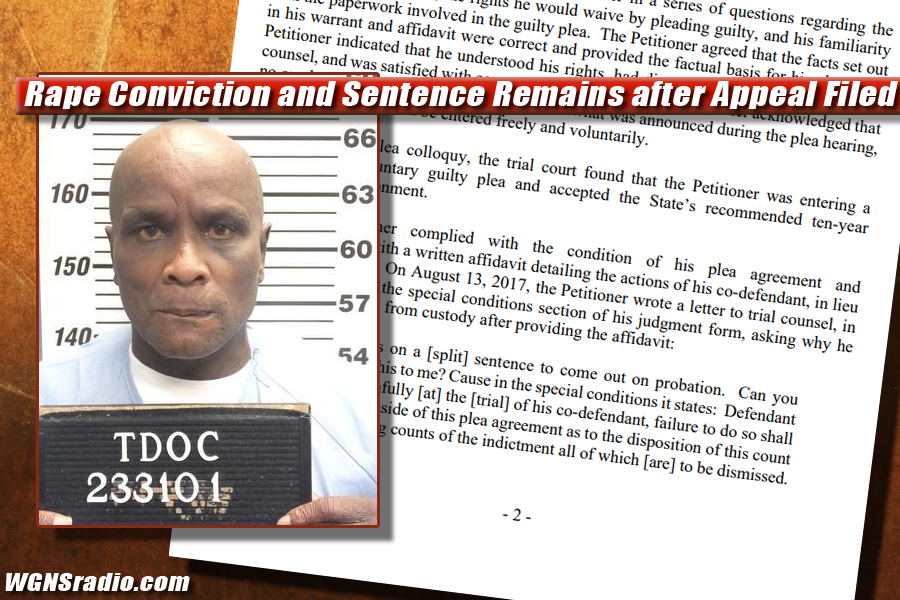 There has been an appeal filed with the courts in a local rape case… a rape that took place five years ago.

ADVERTISEMENT
The victim in the case was a 15-year-old girl. When the crime was committed, Sanders was 58-years-old.

In 2017, David Sanders appeared in a Rutherford County Courtroom and through a negotiated plea agreement, he plead guilty to one count of rape and received a ten-year prison. Part of the agreement included Sanders truthfully testifying against another man accused of similar sexual offenses.

Just four months after pleading guilty to rape in 2017, Sanders wrote a letter to the trial counsel asking why he had not been released from custody. Evidently, he thought by testifying against another man accused of raping the same 15-year-old girl, that he would be released on probation.

The trial counsel wrote Sanders ten days later and explained that he had to serve a full 10-year sentence in prison, which was part of his negotiated plea agreement.

Sanders filed an appeal in the case and argued that his guilty plea was unknowingly and involuntarily entered based on the ineffective assistance of trial counsel.

A post-conviction hearing was held and court documents showed that Sanders admitted that the trial counsel never indicated he would serve his sentence on probation. In fact, court records showed, “The Petitioner testified that, considering the multiple charges in his indictment, he felt that a ten-year sentence was “a pretty good deal.'”

The Court of Criminal Appeals of Tennessee fully reviewed Sanders case and his guilty plea and sentence of 10-years will stand. The final outcome of the appeal was filed this past Friday on April 9, 2021.

Sanders, who is now 63-years of age, will be 68 when he is released from prison. He is currently being held in the Trousdale Turner Correctional Center.

Previous to the 2017 conviction, Sanders was arrested and convicted for rape in 1993. He will remain on the Tennessee Sexual Offender Registry for life.