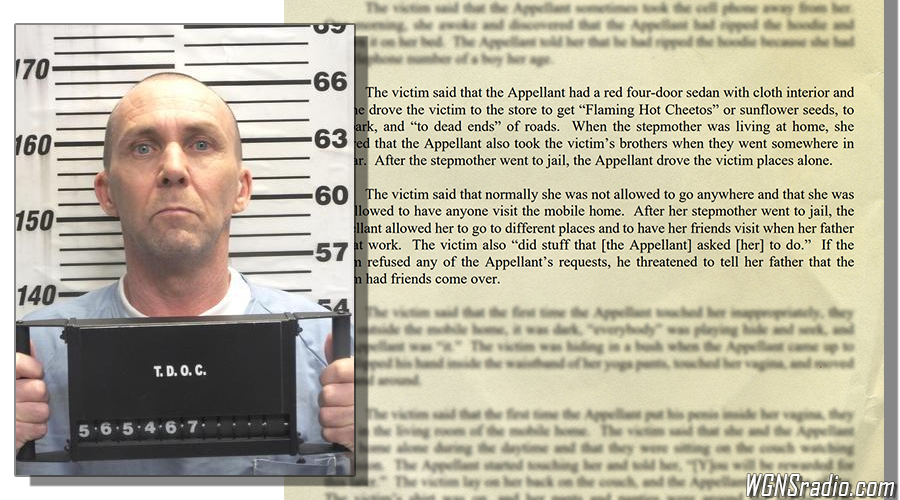 Registered Sex Offender Tandy Tomlin, who was found guilty on eight counts of rape of a child in a Rutherford County Circuit Courtroom and sentenced to 245-years in prison, has filed an appeal in his case.

ADVERTISEMENT
Tomlin, who lived near Barfield Park when he raped the 12-year old victim, claims that evidence was insufficient to sustain his convictions.

In looking over court documents, the victim testified that sexual encounters with Tomlin occurred in their mobile home, at Barfield Park and on multiple occasions when he drove her to the dead end streets of Suzanne and Lawrence, both in the Barfield area.

Evidently, the little girl who was victimized by Tomlin was able to recall detailed information that helped to land the 54-year old behind bars. However, Tomlin believes that the evidence and testimony given by the child, was not enough to equal such a robust prison stay.

The 12-year-old said that the last time Tomlin touched her inappropriately was one to three weeks before her stepmother got out of jail.

The inappropriate relationship ended when she was asked by Tomlin if she wanted him to drive her to the store. The victim said no and claimed that Tomlin responded, “[O]kay, well, I’m about to take everything back that I got you.” The little girl reported that she replied, “I don’t care. I don’t want you to touch me anymore.”

Court proceedings also confirmed that Tomlin was actually related to the victim; evidently through his first cousin.

The Appellate Courts filed on Tuesday (4/13/21), that the state lacked evidence in one of the eight counts of rape of a child convictions. Therefore, count seven was reduced to the conviction of aggravated sexual battery. All other aspects of the case and conviction will remain the same.

The outcome will equal a sentence of 225 years, instead of 245 years in prison. His sentence will officially end in year 2241.

Originally, he was scheduled to be eligible for early release in year 2251. That too will change to an approximate date of September 22, 2245.

Prior to the Rutherford County conviction, Tomlin was convicted for "Attempted Aggravated Sexual Battery" in year 2016 while in Sumner County, Tennessee.