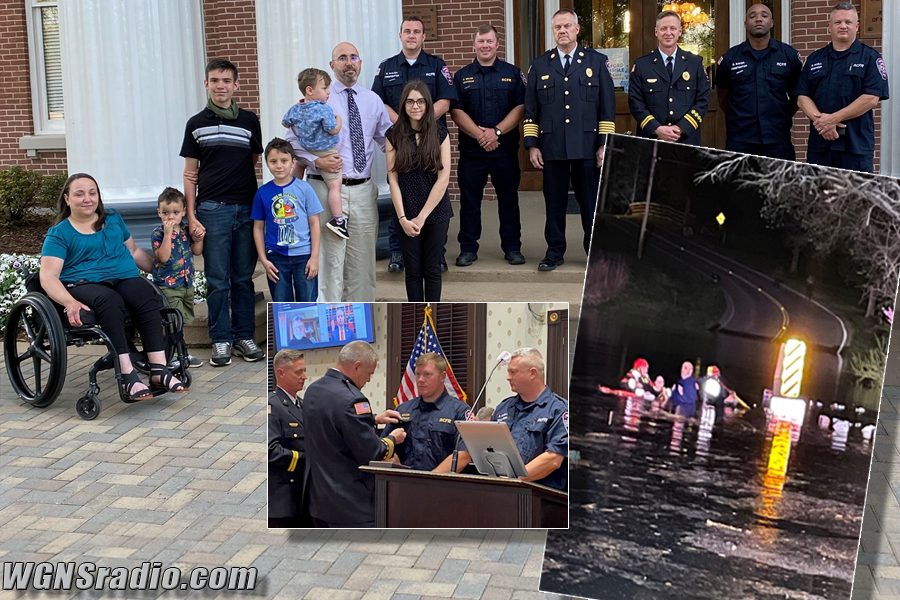 Rutherford County, TN—Four Rutherford County Fire Rescue personnel were recently honored with the esteemed medal of valor for rescuing a man and his thirteen-year-old daughter from their submerged vehicle during the County’s flooding events in March.

Lance Alexis talked about the night of March 28th…

Bob Walsh, Chris Molder, Desmond Baker, and Doug Roell received their commendation and medals at the County Commission Meeting on April 15 with the victims and their family members present.

Alexis thanked the men who saved him and his daughter…

The rescue took place in the area of Central Valley Road, which was badly flooded at the time of the incident.

More Details on the Water Rescue:

On March 28, Lance Alexis and his daughter Annabelle were traveling on Central Valley Road just before 8:00 p.m. Alexis admits it was a poor decision to not take a safer, alternate route. His vehicle was swept away into a ditch and stopped by a hickory tree.

It began taking on water quickly and suddenly he and Annabelle were trying to get every last bit of air they could as the car went under the water’s surface. Before they knew it, RCFR was on scene, deploying a water rescue team, but according to Fire Chief Larry Farley, the crews had no time to waste and did not even have time to get all of their equipment off of the apparatus. They immediately went into rescue mode, with Firefighter Desmond Baker swimming out to the car and breaking the back glass so Lance and Annabelle could escape. The two were rushed over to an ambulance to be assessed and given warm blankets to get their body temperatures back to normal.

“At the last possible moment, these men were our saviors,” said Alexis. “I remember after being rescued, seeing some of the brightest smiles I could ever see. I was in the ambulance and looking at my daughter, who was physically fine but still on a stretcher, and seeing Desmond come toward the ambulance shaking, with blood on his hands. Regret and shame set in immediately.”

Alexis went on to say that instead of giving in to the regret and shame, he chose to focus on those smiles, smiles that he could not believe were there in place of anger or frustration. “I found out later that these men and their coworkers had responded to close to 40 incidents over that weekend, but none quite like ours. I’m sure it’s easy to become frustrated and want to lecture people who make mistakes of this nature, but these men never did that.”

On March 31, Lance and Annabelle were reunited with their rescuers. Details that were fuzzy to Lance were recounted. Lt. Chris Molder shared that if that tree hadn’t stopped the vehicle from moving further, Lance and Annabelle could have found themselves six to eight feet under the water.

Alexis, stunned by the magnitude of it all, apologized to the men that saved him and his daughter and was met with nothing but, “We were glad to do it, and glad that it turned out the way it did” attitudes. All the team asked was that Alexis be willing to share his story to hopefully prevent others from making the same or a similar mistake. “I will certainly tell anyone who is willing to listen to always take the safer route.”

“I’m happy to be here sharing my story,” said Alexis. “Without these men, we would not be here, and that’s a fact.”

Below: Video from a recent Rutherford Co. Commission Meeting