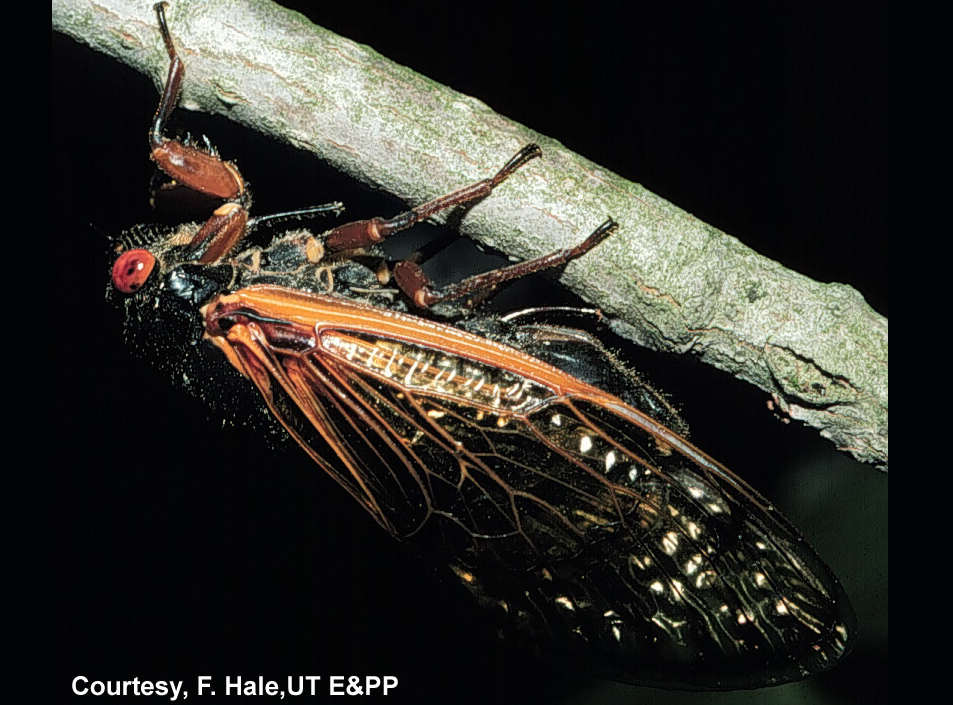 By now you’ve heard the cicadas are coming. In fact, they are practically here. Entomologists predict the periodical cicada that are on a 17-year reproduction cycle will start emerging from the soil in mass within the next several days, and some early emergence has been documented in parts of Tennessee. What you may not have heard is that those young fruit trees you planted this year, or maybe in the last few years, are in danger if you have a large cicada population in your area.

After all the noisy mating, the female periodical cicada will select woody shoots on trees and cut slits in the bark in which she will lay her eggs. The cicada prefers woody growth from the previous year that has relatively thin, smooth and soft bark and which is about the same diameter as a pencil. “Even a single female cicada may cause a lot of injury,” says David Lockwood, a University of Tennessee Extension specialist who works with fruit and nut tree growers. “However, the high cicada populations that are expected to appear can magnify damage expectations immensely.”

ADVERTISEMENT
Lockwood says injury from cicadas on mature trees, vines or bushes may result in death or breakage of shoot tips, which, while not pleasing to look at, may cause relatively little actual damage. However, the potential impact on young plants is much greater. “Entire branches that would grow into permanent scaffold limbs for fruit and bear a large portion of future crops may be severely injured by the damage to their bark, thus affecting their productive potential throughout the tree’s life. Preventing damage from occurring on young trees is much preferred over coping with damage after it has occurred.”

Frank Hale, UT Extension entomologist, adds that some insecticides can be used to protect plants, but physical exclusion of cicadas is more effective. “Covering the canopy of young plants with netting having a mesh size of a quarter inch or less and tying it around the trunk under the lowest limbs will provide a physical barrier to cicada egg laying,” he recommends. Note that the gauge for most bird netting is too large to prevent cicadas from entering the netting. Hale recommends mosquito netting, nylon tulle fabric or light-weight spun fabric such as tobacco shade cloth or floating row covers. The coverings can be safely removed when the male cicadas have stopped their loud calling and all the cicadas have died off — about six weeks after they emerge.

But wait! Netting alone is not enough to prevent damage to young trees. Lockwood says that unless a frame is used to suspend the netting so that it does not touch the plant canopy, some young limbs may be damaged where the net lays directly on small branches. “These areas should be pruned off once nets are removed as this could cause problems for the trees as they grow,” he says. “These branches should be removed during fall and winter dormant pruning and new shoots encouraged to grow and take their place. Even if just the terminal portion of a new scaffold limb is damaged, removing the entire branch and encouraging the growth of a new replacement shoot is preferable to heading a branch back to just below the damaged area as this could cause problems in developing a good scaffold limb.”

Lockwood adds that owners should remove and destroy damaged tips from branches within four to six weeks following egg laying. This will prevent nymphs hatched from eggs on the infested tree from entering the soil and feeding on tree roots.

Both experts say that over time the slits made by the egg-laying cicadas can serve as openings to a number of diseases and pests that can damage the tree or fruit. Secondary issues that may develop include woolly apple aphids on apple trees and lesser peach tree borers on stone fruit trees.
Tags: cicada cicadas Murfreesboro Nashville news Tennessee TN
Sections: News