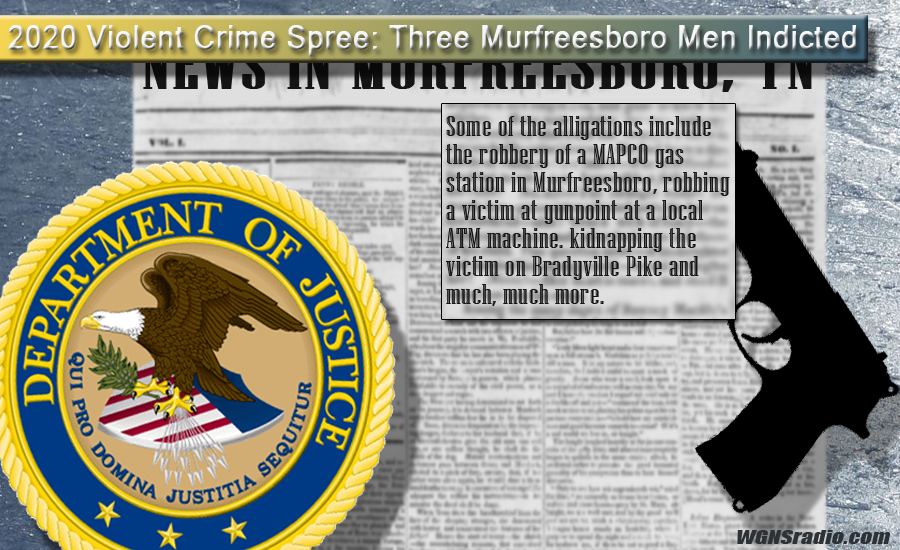 Some of the allegations surrounding a violent crime spree last summer included robberies, carjackings, kidnappings and firearms violations, according to the U.S. Department of Justice. At least three Murfreesboro men were arrested as a result of a federal investigation into that crime spree.

ADVERTISEMENT
25-year-old Joshua Hallmon, 20-year-old Charles Melvin Walker and 20-year-old Walter Lee Williams were charged with multiple counts of Hobbs Act robbery, carjacking, kidnapping, and using a firearm in during and in relation to a crime of violence. Additionally, Joshua Hallmon was charged with being a convicted felon in possession of a firearm.

According to the indictment, on July 6, 2020, the trio committed an armed robbery of a Twice Daily convenience store in Murfreesboro, and on July 23, 2020, they committed an armed robbery of a Mapco gas station in Murfreesboro. Then, on July 26, 2020, the trio carjacked an individual at gunpoint on Bradyville Pike in Murfreesboro. After taking the victim’s phone and wallet, they drove the victim to an ATM and forced the withdrawal of $1,000 cash before discharging a firearm out the window of the vehicle and eventually putting the victim out of the car and taking his Honda Accord. The indictment and other court records also allege that on the same day, the defendants attempted to carjack another vehicle in Franklin, Tennessee, and shot into the occupied vehicle during the attempt.

Later that same evening, law enforcement responded to another carjacking and kidnapping incident and located a victim on Interstate 24, with a gunshot wound. The victim told police that he was kidnapped at his residence in Murfreesboro and his Ford F150 pickup truck was taken. The victim was also shot during this carjacking. A short time later, officers with the Smyrna Police Department observed the stolen pickup truck and the driver fled at a high rate of speed. After a pursuit by area law enforcement, the driver crashed in the Antioch, Tennessee, area and fled on foot. He was found a short time later hiding in a convenience store bathroom and was taken into custody. The driver was identified as Joshua Hallmon. Arresting officers found a magazine and ammunition in his pocket and recovered a .380 caliber handgun from the pickup truck that he was driving. Hallmon was found to have previously been convicted of at least three felonies and was prohibited from possessing a firearm.

The next day, Murfreesboro Police Department officers found the stolen Honda Accord and attempted to stop it, but the driver fled and eventually abandoned the car and fled on foot into a wooded area. He was taken into custody a short time later and identified as Charles Melvin Walker. The follow-up investigation led to the identification and arrest of Walter Lee Williams, the third suspect in these carjackings.