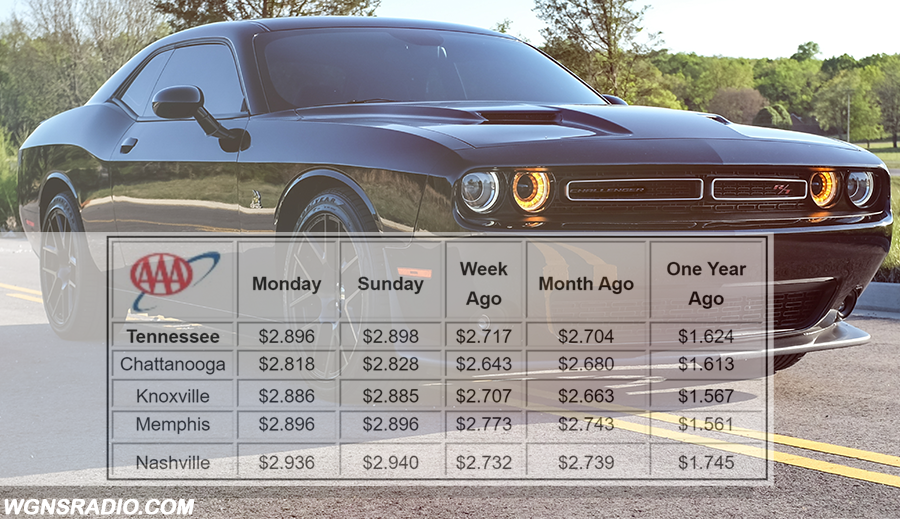 Gas prices across Tennessee jumped nearly 18 cents over last week in response to the recent Colonial Pipeline shutdown that led to a deluge of demand for gasoline as well as tight gasoline supply across the Southeast. The Tennessee Gas Price average is now $2.89 which is 19 cents more than one month ago and $1.27 more than one year ago.

“The Southeast will continue to experience tight supply this week as terminals and gas stations are refueled,” said Megan Cooper, spokeswoman, AAA - The Auto Club Group. “Over the weekend, gas prices started to stabilize, but are expected to fluctuate in the lead up to Memorial Day weekend.”

The national gas price average is the most expensive in six years at $3.04. Gas prices were expected to flirt with $3/gallon leading up to Memorial Day weekend, but last week’s shutdown of the Colonial Pipeline caused prices to spike weeks ahead of the holiday.

On the week, the national average jumped eight cents. States like Georgia, North Carolina and South Carolina, where the gasoline supply was strained due to the pipeline shutdown, saw prices jump as much as 21 cents in matter of days. With the pipeline back in operation and supply being restored, gas prices in these states and the national average have stabilized since the end of last week.

AAA forecasts 34 million Americans to take a road trip 50 miles or more from home from May 27 to May 31 to celebrate the unofficial kickoff to summer. That is a 52% increase compared to last summer, but nearly 9% below pre-pandemic levels in 2019. Regardless, motorists will be met with the most expensive gas prices since 2014.

“This is going to be an expensive summer for motorists. However, we do not expect it to deter travelers from hitting the road. AAA finds that despite the higher pump prices, Americans still take their road trips but just may not travel as far as originally planned, or go to their planned destination and spend a little less,” added Cooper.

Crude oil prices and gasoline demand will be two large factors in determining how expensive gas prices will go.

At the close of Friday’s formal trading session, WTI increased by $1.55 to settle at $65.37. Market optimism that crude demand will recover, despite an uptick in coronavirus infection rates in some countries, helped to lift prices last week. Prices could continue to climb this week if the market remains optimistic as vaccines continue to roll out. Additionally, prices increased after the Energy Information Administration’s (EIA) latest weekly report revealed that total domestic crude oil inventory decreased by 400,000 bbl to 484.7 million bbl. If EIA’s next report shows another decrease in total domestic crude supply, crude prices could increase further.